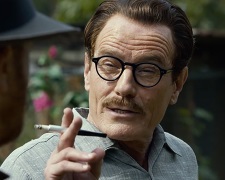 The history of this broad subject matter has been well documented.  In the late 1940s, the United States Government used its oddly named House Committee on Un-American Activities to investigate actors and filmmakers who were accused of using the medium to push their communist views on the community.  George Clooney’s Good Night, and Good Luck, released back in 2005, brilliantly captured the era and the subject matter.

Trumbo looks at the same events through the eyes of Dalton Trumbo (Crantson), an acclaimed screenwriter working in Hollywood.  He was one of the highest paid writers in the business but that changed in the late 1940s when he was blacklisted as a Communist sympathiser.  Asked to explain himself before the House Committee, Trumbo refused to cooperate and was jailed for close to a year.

It’s hard to believe with the benefit of hindsight.  American citizens were being sacked and imprisoned merely because of their views on the government.  Directed by Jay Roach (Recount), Trumbo shows us how fear can be wrongly used as a political tool.  It’s a mistake that society keeps making again and again.

The film also shows the emotional toll that it took on those affected.  Trumbo was resolute with his views but that left him at odds with friends who felt they should yield and admit defeat.  Was the end goal worth the huge personal cost?  Trumbo’s relationship with his wife (Lane) and children also deteriorated.  They too were seen as outcasts within the community and Trumbo struggled to offer the necessary moral support.

It’s repetitive in places but Trumbo is a moderately interesting character study.  It’s not putting Dalton Trumbo on a pedestal and asking for him to be declared a saint.  Like all of us, he had his good qualities and his bad qualities.  He was continually torn between the needs of his family and his personal desires to prove the government wrong and to be an acclaimed writer.  He struggled to find the balance.

Bryan Cranston won several Emmy Awards for Breaking Bad but Trumbo marks the first time he will be attending the Academy Awards as a nominee.  He delivers a great performance and is well supported by a cast that includes a villainous Helen Mirren and subdued Louis C.K.  John Goodman also shines as the head of a film production company who specialise in low-quality movies (for use of a better term).

The film has been attacked from several angles as being factually inaccurate and it seems there is merit in their arguments.  I won’t say too much more as to do so would spoil key plot points for those previously unfamiliar with Trumbo and his work.  A little post-film reading and research may help satisfy your curiosity.