Review: How To Be Single 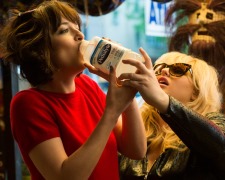 A lot of thought goes into finding a suitable release date for a movie.  You don’t want face off against a huge blockbuster and you also want to avoid having to compete against a bunch of other new films in the same week.  There are some times however where the date appears obvious.  That’s the case for How To Be Single which is being released in Australia in the aftermath of Valentine’s Day.

Borrowing a little from Sex & The City, the film follows four women in New York City who are unattached for different reasons.  Meg (Mann) enjoys her job and would rather focus on her career than a burdensome relationship.  Alice (Johnson) has just come out of a long-term relationship and is rediscovering what it’s like to be single.  Lucy (Brie) won’t settle for “second best” and is on a long quest to find a guy who is perfectly compatible.  Robin (Wilson) loves one night stands and doesn’t want to be tied to a single man.

The paths of these characters cross repeatedly throughout the film and they meet an assortment of guys who have their own views on relationships.  It’s a rushed, choppy screenplay that struggles to find the balance between the respective stories.  There’s one moment where Alice starts falling for a widowed father (Wayans Jr) but it’s all over before you even get to know him.  The continual shift between comedy and drama adds to the confusion regarding the film’s intentions.

While the film is far from perfect, it’s nice to see a romantic comedy where the ending isn’t a foregone conclusion.  You’re not quite sure what will come of these characters and while there are a few formulaic moments, there are also a few surprises.  It drums home a worthy message that yes, relationships are great but yes, single life can be great too.  It comes down to what each of us wants out of life.