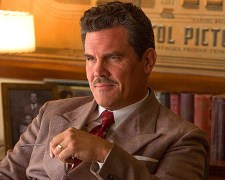 There’s a moment in Hail, Caesar! where a kidnapped George Clooney is lying unconscious on a lawn chair in a dimly lit room.  He is awoken by the sound of a vacuum cleaner continually banging up against the door.  He gets to his feet, opens the door, and finds a housekeeper going about her duties.  She has no idea what’s going on and doesn’t really care.  She just points him in the direction of the kidnappers who are having a few drinks down the hallway.

This simple scene left me a wide smile on my face.  If you’re going to kidnap someone and bring them to your house, it’s probably best to plan ahead and give the cleaner the day off.  Some will find this joke silly and stupid.  Others, myself included, will find it hilarious.  It’s this dry, off-beat sense of humour that I love about the Coen Brothers.  They’re on a par with Paul Thomas Anderson as my favourite filmmakers working today.

Despite my admiration for their talents, I’ll happily admit that Hail, Caesar! isn’t one of their very best.  There are more than enough laughs but the premise lacks the entertaining complexity that we saw in Intolerable Cruelty and Burn After Reading.  Set in 1951, it all revolves around Eddie Mannix (Brolin), the head of a Hollywood movie studio.  He’s working long hours to keep the studio’s many films on track and on budget.

Things go haywire when one of their big stars, Baird Whitlock (Clooney), is kidnapped.  It shuts down production on his big Roman epic and two nosy journalists (both played by Tilda Swinton) are fishing for details to publish in their gossip columns.

While trying to pull together $100,000 in ransom money, Eddie still has to go about his day job and deal with other issues.  An acclaimed director (Fiennes) is frustrated by a leading actor (Ehrenreich) who can barely string a sentence together.  A high-profile actress (Johansson) has become pregnant while playing a mermaid in a synchronised swimming flick.  An aerospace company is trying to convince him to leave the studio and become their new CEO.

There’s not a lot of overlap to the stories and they have a “skit” type feel.  Trailers and television advertisements boast about the great cast (deservedly so) but most of them are limited to a handful of scenes.  Some don’t even require a wardrobe change.  That said, Josh Brolin is fantastic in the lead role.  His suave, calculating personality is best illustrated during an amusing scene where he explains his new biblical movie to a group of religious leaders.

Were the Coen Brothers intending this to be a goofy throwback to the 1950s or are there deeper undertones in the same vein as their last effort, Inside Llewyn Davis?  I’m still not sure.  Fans of these iconic filmmakers should enjoy the ride.  Those unfamiliar with their previous work may find it all a bit too strange.