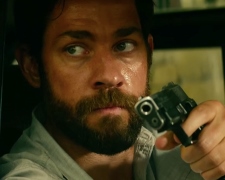 This isn’t the type of movie I was expecting from director Michael Bay.  He’s had one previous crack at bringing a real life story to the screen but 2001’s Pearl Harbor was slammed by the majority of critics.  He’s better known for his fun, unrealistic action films such as Bad Boys, The Rock, Armageddon and Transformers.

The events depicted in 13 Hours are from not long ago.  The year is 2012, the setting is Libya, and the central characters are a group of ex-marines and ex-army guys who are now private military contractors.  They’re the “hired help” who have been directed to protect CIA operatives gathering intelligence.

It’s clear that they don’t want to be there.  The city of Benghazi is one of the most dangerous places in the world following the death of Muammar Gaddafi.  These guys have accepted the job only because they have no other options.  There are no jobs back home in the United States and they need a means to provide for their families.  The money is good.

Tensions in Libya are high but thing spiral out of control when a diplomatic outpost housing the American ambassador is attacked a large group of Islamic militants.  They’re well-armed and intent on causing as much damage as possible.  A heavy burden then falls upon the military contractors who must risk their own lives to save many others.

It’s hard to knock the film’s spirit and intent.  The word is often overused but these guys would meet the definition of “heroes”.  They were well-trained and their actions prevented what could have been a far greater tragedy.  Rather than load the film up with Hollywood stars, Bay has gone with lesser known actors for the leading roles.  The most recognisable is John Krasinski (The Office, It’s Complicated).

Unfortunately, the film struggles with the “bigger picture”.  We’re told in the opening credits that there are “turf wars” in Libya but we don’t really know what they’re fighting for and why these militants are so strongly opposed to the United States.  The work and impact of the CIA agents is also glossed over.  We see them discussing stuff but that’s about it.  Oh, and they have a clichéd chief (Costabile) who feels the need to belittle them constantly.

What that leaves us with is a glorified computer game.  The good guys use an array of firepower to kill the bad guys one-by-one.  It is shot and edited in a chaotic fashion to depict what it would have actually been like in the same situation.  That is offset by the occasional shot from a military drone to provide a broader perspective.

Given the focus is on battle sequences as opposed to character development, the 144 minute running time feels unnecessary.  Fans of Michael Bay may think otherwise.