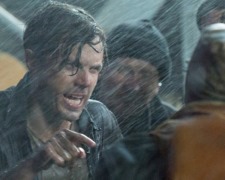 It’s hard to believe that in the space of two months, we’ve been treated to three separate films set in 1952.  Carol was released in January, Brooklyn was released in February, and now The Finest Hours has been released in March.  The coincidence extends a step further with all three films set in the north eastern United States.  You could let your mind stray and wonder if these characters ever crossed paths.

It’s unlikely they would have done so on 18 February 1952.  It was at that time when a huge tanker, the SS Pendleton, split in two off the coast of Massachusetts during a severe storm.  For the 33 surviving crew members, their situation couldn’t have been more perilous.  The tanker was sinking into the freezing water, their communication lines had been cut, and the flimsy lifeboats would never hold up in the rough seas.

Based on actual events, The Finest Hours is told from several perspectives.  The first is from aboard the Pendleton.  Following the loss of the tanker’s negligent captain, Ray Sybert (Affleck) is trying to rally his fellow crewman and keep it afloat.  Not everyone agrees with his unorthodox approach and there are several tense exchanges.

The second is that of Bernie Webber (Pine), a young, passionate Coast Guardsman stationed at the small town of Chatham.  Under the strict instructions of his chief officer (Bana), Bernie and three colleagues have set out in search of the missing tanker on a tiny 36-foot motor lifeboat.  With the waves increasing and the weather deteriorating, most believe it to be a “suicide mission”.

The final perspective is that of Miriam Pentinen (Grainger), Bernie’s fiancé who must endure an agonising wait back at the Coast Guard station.  She met the softly spoken Bernie on a blind date and the two have been inseparable ever since.  She’s not afraid to voice her disapproval at those who sent her beloved partner out to sea.

This may be a powerful true story but for some odd reason, the three-man screenwriting team have packed it with distracting, unnecessary clichés.  There’s a moment when Bernie is walking out the door of the coastguard headquarters when the phone rings.  He looks back, decides not to answer it, and heads out in the driving rainstorm.  As the audience, we can see that it’s an emotional Miriam making the phone call.  Did she miss the last chance to speak with her husband by a matter of seconds?

There’s not a lot of texture to the characters either.  They’re either horribly awful (such as Eric Bana as the overbearing coast guard chief officer) or wonderfully endearing (such as Casey Affleck and Chris Pine who each have an uncanny sixth sense).  It’s oversimplified and lacking in tension.  The Finest Hours is based on a great tale but I wouldn’t have told it this way.