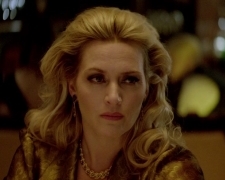 Triple 9 is a complex story with simplistic characters.  The two don’t go together.  Set in Atlanta, it revolves around Irina Vlaslov (Winslet), the wife of a powerful Russian mobster who is currently in jail.  We’re told that even Putin is afraid of this guy but since we never get to meet him, aside from a simple phone conversation, it’s hard to forge our own opinion.

Irina has somehow managed to maintain her husband’s business empire with the help of few hired goons.  Her main focus though is on securing his release from prison.  Apparently there’s some key information that could clear his name.  Part is located in a safety deposit box within a bank and the other part in a safe housed by Homeland Security.

She has therefore engaged the services of some well-trained criminals to break into each facility and steal the evidence.  They are led by a shrewd planner (Ejiofor) and the group includes two corrupt police officers (Mackie and Collins Jr.)  The film is sketchy when it comes to their backgrounds and motivations.  Why have they turned to a life of crime, why do they need so much cash, and what are their plans once it’s all over?

While most characters in the film are “bad guys”, there are two well-intentioned cops who are putting the pieces of the puzzle together and closing in on those responsible.  The first is a seasoned detective (Harrelson) with an obvious drug addiction (which no one seems to care about).  The second is his inexperienced nephew (Affleck) who is out of depth but fortunately stumbles across important intelligence.

What does this all add up to?  Not much.  The quality cast are given very little to worth with.  Kate Winslet dons a Russian accent and is laughably bad as the film’s chief villain.  How can so many people find her intimidating?  Woody Harrelson is equally goofy as the investigating detective.  It’s as if the cast were told to over exaggerate the qualities of their respective characters.

Directed by Australian John Hillcoat (The Road, Lawless), Triple 9 struggles to generate tension.  There’s a quality scene where a group of police officers carefully sift through an apartment building in search of a gunman but it’s a rare highlight.  The rest is a jumbled mess that finishes on a bizarre note.