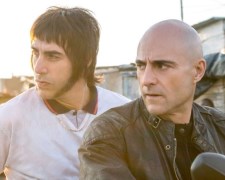 I’m a fan of Sacha Baron Cohen.  His humour is politically incorrect but there’s an often something more significant behind it.  Borat earned him an Oscar nomination for best adapted screenplay and he followed that with Bruno and The Dictator.  Not all of his jokes hit the mark but he has an unorthodox way of highlighting inconsistencies that exist within society.

Unfortunately, Grimsby can’t be described as such.  This is a low brow comedy with not much to offer in terms of story.  Nobby Butcher (Cohen) won’t be winning any father of the year awards.  He seems to enjoy himself most when he’s down at the local pub watching football.  When he does spend time with his 11 children, he’s offering pearls of wisdom such as the benefits of smoking tobacco as opposed to stronger drugs.

They all reside in the small British town of Grimsby.  You’d be hard pressed to find a community with a lower socioeconomic status.  They’re a sister city to Chernobyl and the residents are the self-described scum that are “keeping the Fast & the Furious franchise alive”.  Nobby has lived there all his life and fits right in.  His unemployed and lives off welfare payments.  He even pretends that one of his kids has leukaemia to get even more money from the government.  Got a clear enough picture of this guy?

For the past 28 years, Nobby has been searching for his long-lost brother, Sebastian (Cohen).  They spent a brief period of time together in an orphanage but were separated as young children.  They finally cross paths at a charity event in London.  Sebastian is there as an MI6 agent who is trying to secure the safety of a renowned actress and philanthropist (Cruz).  Nobby is there to take selfies, drink free champagne, and crack inappropriate jokes.

The event turns into a complete debacle and Sebastian is framed for murder.  He is left with no other option but to head back to Grimsby with his brother, the only person he can trust, and keep a low profile until he can identify the real killer and clear his name.  Suffice to say that won’t be easy when trying to battle (1) the bad guys that are hunting him, and (2) Nobby’s incompetence.

It appears that no topic was off limits when Cohen drafted the jokes for the film.  He’s clearly going for shock value with references to paedophiles, rapists, and sex offenders.  He’s also found plenty of room for gross-out humour involving excrement and other bodily fluids.  It’s distasteful but many will still find it hard to maintain a straight face.  There are laughs on offer here.

That’s about it though.  The premise is weak, the characters are dull, and it lacks the memorable punch that we saw on offer in Borat and The Dictator.  Clocking it at a very short 83 minutes, you can’t help but think this isn’t the final product that director Louis Leterrier envisioned.  What else didn’t work and was left on the cutting room floor?