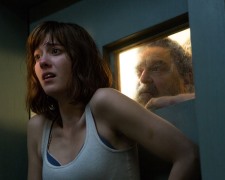 Batman Vs. Superman hits cinemas across the world in two weeks.  The production was announced at Comic-Con back in 2013 in front of thousands of screaming fans.  More new stories were written a month later when Ben Affleck was named as the caped crusader.  Since then, the publicity department has churned out 4 different trailers and numerous TV ads.  Clips have been shown on late night talk shows as the stars do their own promotion.

The approach for 10 Cloverfield Lane could not be more different.  Few people even knew this movie was being made until less than two months ago.  A trailer was shown in the United States before screenings of 13 Hours: The Secret Soldiers of Benghazi and caught many film lovers by surprise.  Director Dan Trahctenberg and producer J.J. Abrams are behind the low-key release strategy.  It’s a throwback to the pre-internet days where the first time you heard about a movie was seeing a trailer on the big screen.  It’s how Dan himself first learned about Jurassic Park in 1993.

That trailer was just the start of what has been an elaborate tease.  It doesn’t contain a single ounce of dialogue until the last few moments where John Goodman screams “don’t open that door” to an equally frightened Mary Elizabeth Winstead.  Exactly what is he referring to?  The film’s title has also got people talking.  Given the use of the word “Cloverfield”, many have been asking if this is a prequel, sequel or spinoff to the 2008 monster film that was also produced by Abrams.

The film is released tomorrow in Australian cinemas and everyone is still in the dark.  I went searching for a few audio clips to use for my radio programs and couldn’t find anything.  That’s highly unusual.  So too is the cast list which contains just three names – Goodman, Winstead and Gallagher Jr.

I usually say that the less you know about a movie going in, the better.  Well, everyone’s in that position with 10 Cloverfield Lane because so little has been made public about the plot.  I think that’s part of the reason I liked the film so much.  There are unexpected twists, surprising turns, and you have no idea what is going to happen from scene-to-scene.  It held my attention throughout.

I have somehow found a way to use 400 words without actually mentioning anything about the premise myself.  It’s the will of the director and I’d love for audiences to enjoy it in the same spoiler-free way.  Some will be frustrated by the film’s unorthodox nature but as someone who sits through 200 movies a year, it’s a breath of fresh air.