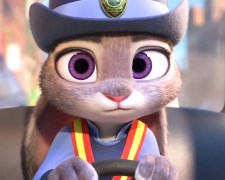 The talking animals that inhabit the town of Zootopia are told that “anyone can be anything.”  It’s part of the reason why Judy (Goodwin) wants to be a police officer. Such positions are usually held by larger animals such as lions, leopards and rhinos but she wants to break down barriers and become the first rabbit to wear an officer’s badge.

Her protective parents, who have 275 other children, aren’t quite as taken with the idea.  They offer her the advice that “it’s okay to have dreams but don’t believe in them too much.”  They’d rather she help manage the family carrot business than put her life in danger each day as a cop.

Judy finishes police school and graduates top of her class but it’s still not going to make her life any easier.  On her first day of work, she is assigned parking duty by her boss, a buffalo named Bogo (Elba).  He doesn’t believe in her abilities and is leaving the “meatier” assignments to the other officers within the force.

The tension between them reaches a tipping point when Judy brazenly takes on a missing person case.  A river otter hasn’t been seen for two weeks and his distraught wife (Spencer) is in desperate need of answers.  Bogo delivers an ultimatum that Judy immediately accepts.  She has 48 hours to find the otter and prove herself.  If not, she must hand in her badge and resign.

There’s no doubt that Judy has skills but she will need some help to get to the bottom of this mystery.  That’s where Nick Wilde (Bateman) enters the picture.  He’s a sly fox who has been making a small fortune as a con artist on the streets of Zootopia.  They form an uneasy alliance which develops into an unexpected friendship.

The film’s messages aren’t exactly subtle.  It’s clearly making reference to the discrimination, prejudices and stereotypes that exist in our own society.  It wants younger audiences to ask questions about our world and think of answers that can make it better.  It’s not all black and white though.  She’s the hero of the story but even Judy makes a few inappropriate comments that she must acknowledge and learn from.

The heart of Zootopia is the bond that develops between Judy and Nick.  Each has preconceived notions of the other when they first meet.  That slowly dissipates as the film progresses and they learn more about their respective backgrounds.  It turns out they’re not as different as they first realised and that a book shouldn’t be judged by its cover.

Stepping back from the movie’s key themes, the creative team behind the project deserve praise for crafting a fun, complex world.  There’s a brilliant moment where Judy and Nick seek help from the Department of Motor Vehicles.  Their search for quick answers is delayed by a slow-moving sloth who won’t be setting any touch typing records.  It’s just one example in a film that includes yaks, shrews, polar bears, weasels and a singing gazelle.