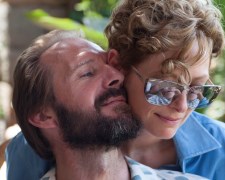 Pantelleria is a small volcanic island off the south west coast of Italy.  It has a population of just 7,000 people and is home to a nature reserve and a large lake that was formed from a volcanic crater.  It’s not your typical holiday destination but it’s where rock star Marianne Lane (Swinton) finds herself.  Having recently undergone vocal cord surgery, she needed to find a peaceful place where she could keep a low profile and recuperate.

The opening 5 minutes of the film doesn’t feature a single ounce of dialogue.  You wouldn’t expect it either given that Marianne can’t talk.  She’s driving around and lying on the beach with her current partner, Paul (Schoenaerts).  That all changes with arrival of Harry (Fiennes), Marianne’s ex-boyfriend who turns up unexpectedly with a young woman named Penelope (Johnson) who he claims is his long-lost daughter.

Loosely based on the Swimming Pool, a 1969 French-Italian film, director Luca Guadagnino admits he was interesting in the story because it featured “a quartet of people entangled in their own nostalgic desire for one another.”  That’s not a bad way of describing it.

Harry is certainly the catalyst.  He never shuts up and he’s continually changing the subject matter.  He regrets losing Marianne several years ago and he’s determined to win back her affections.  He cunningly reminds her of their great times together and he’s quick to paint Paul as being a boring, sleepy individual who doesn’t fit her personality.  He’s not subtle in the slightest.

Where will it all head?  Paul realises that Harry is a threat but he’s being careful not to lose his cool and retaliate.  Marianne is starting to have a few doubts but her inability to speak makes it difficult to communicate with both her suitors.  The big mystery in this equation is Penelope.  She comes across at the naive pawn but she too knows how to play a few mind games.

In the same vein as Guadagnino’s breakout film, I Am Love (which made my top 10 list in 2010), A Bigger Splash is rich when it comes to visual imagery.  The character’s eyes start to wander and so too does the zooming camera lens.  There are many tight close-ups of body parts including torsos, feet and teeth.  There’s also an abundance of full frontal nudity which you wouldn’t expect if this was made in America.

There’s a series of short flashbacks which hinder the narrative.  They don’t offer enough in terms of background information and only reiterate what we can already see from the current day storyline (i.e. Harry and Marianne once had a strong connection).  The performances make this worthwhile though.  It’s a curious piece and you’re never quite sure which characters have the upper hand.  It makes the ending even more intriguing.

You can read my chat with director Luca Guadagnino by clicking here.