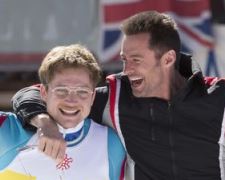 When asked about my favourite sporting movies, one of the first that comes to mind is Rudy.  The 1993 drama told the true story of Daniel ‘Rudy’ Ruettiger who dreamed of playing college football for the University of Notre Dame.  It would take too long to detail the huge adversity that he had to overcome.  After years of hard work and perseverance, he was finally given a few seconds on the field during the final game of the season in his final year at college.

Part of the reason that the film has stuck with me is that it’s not a movie about a team or a player that reaches the top of their sport.  Rudy was not the best.  He was never going to be the best.  It stop him from trying though.  He had a love for the game that could not be quashed.  If you haven’t seen the film, do your best to track it down.  It also features a powerful and inspiring film score from the late Jerry Goldsmith.

The reason I refer to the tale of Rudy is that is has parallels with Eddie The Eagle.  One of my first Olympic memories is from the 1988 Winter Olympics in Calgary and the publicity generated by Michael “Eddie” Edwards, a 20-something-year-old ski jumper from Cheltenham, England.  The country wasn’t known for their prowess in ski jumping.  In fact, they conducted no trials and Edwards was the first ski jumper to ever represent Great Britain.

The film culminates with the Games in Calgary but there’s a lot of material to cover in the lead up.  We see in the early scenes that Eddie has a single dream that dominates his life.  Most athletes pick a sport and then strive to compete at an Olympic level.  Eddie took the reverse approach.  He knew he wanted to represent his country at the Olympics… he just had to find a sport first.

There was no shortage of people trying to stop him.  Eddie still lived at home with his parents and his father wanted him to follow in his footsteps and earn a regular living as a plasterer.  The British Olympic Association didn’t want to use taxpayer dollars to fund an athlete with zero chance of winning a medal.  Fellow ski jumpers saw Eddie as a laughing stock and were concerned that he would direct attention away from elite ski jumpers who had spent years training for the event.

All of those groups had a point but it’s clear that director Dexter Fletcher (Sunshine on Leith) wants audiences to fall in love with Eddie and his “never give up” attitude.  The tone of the film is light and it chooses not to shine a harsh spotlight on Eddie and his motivations.

Eddie’s only major supporter in the movie is Bronson Peary (Jackman), a former ski jump champion who threw his career away and is now a washed up alcoholic looking for redemption.  He reluctantly takes Eddie under his wing and becomes his coach.  You may be disappointed to learn that no such character existed.  The writers have tried to craft the ultimate crowd-pleaser but they’ve got a few steps too far.  Some parts feel unbalanced and don’t ring true.

I’m a fan of Taron Edgerton (Kingsman: The Secret Service) and he’s commendable in the lead role.  He’s created a likeable character who looks and sounds very much like the real Eddie Edwards.  You may cringe at some of the cheesy dialogue but you can see Edgerton and Hugh Jackman are giving it their best shot.  Oscar winner Christopher Walken makes a brief cameo but his confusing subplot adds little-to-no value.

It turns out there was no shortage of material that came out of the 1988 Winter Olympics.  It was at the same time when a group of Jamaicans found fame while competing in the bobsled competition.  Their tale was chronicled in 1993’s Cool Runnings when even the ending was changed to help make it more audience friendly!  Two decades have passed by the same adage applies – never let the truth get in the way of a good story.