Review: The Man Who Knew Infinity 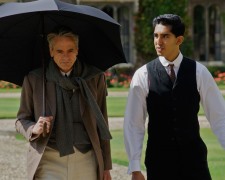 There’s a scene in Good Will Hunting where maths professor (Stellan Skarsgård) is trying to convince a psychologist (Robin Williams) to take on a new patient (Matt Damon).  As part of his argument, he compares Damon’s character to an Indian mathematician from 100 years earlier who he describes as an “unparalleled genius” despite having no formal education.  The guy’s name was Srinivasa Ramanujan and now, 20 years after the success of Good Will Hunting, he finally gets his own movie.

The story of Ramanujan will be new to many.  He doesn’t quite have the profile of other 20th century masterminds such as Alan Turing and Stephen Hawking (who were both subject to biopics in 2014).  It’s easy to see why first-time writer-director Matt Brown was attracted though.  Ramanujan was the ultimate underdog and had to jump many hurdles on the path to recognition.

Dev Patel (Slumdog Millionaire) takes on the title role and the film begins in India where a young Ramanujan is trying to find work as an accountant in southern India.  It’s clear that he has an incredible gift when it comes to numbers.  He doesn’t need an abacus but his boss asks him to keep one on his desk to at least give the impression that he knows what he’s doing.

With no access to a proper education in Indian, Ramanujan had gathered most of his knowledge through books.  He read an array of mathematical textbooks and started developing his own theorems and equations.  The founder of the Indian Mathematical Society recognised Ramanujan’s gift and used his contacts to get Ramanujan a place at the University of Cambridge in England.  He would study under the tutelage of mathematician G.H. Hardy (played by Jeremy Irons).

It’s at Cambridge where most of the film takes place.  From his first day on campus, Ramanujan is itching to get his works published but others propose a more cautious approach.  Hardy wants him to prepare detailed proofs so that his theories can be checked and verified.  In contrast, Ramanujan sees himself as an “artist” and doesn’t want be bogged down with remedial paperwork.  It’d like watching Picasso painting a masterpiece and then asking him for a 100 page essay on how he did it.

That wasn’t the only hurdle Ramanujan had to overcome.  On campus, he was continually belittled by other professors for his Indian heritage and his lack of education.  A lack of friends and strong sense of homesickness only compounded his troubles.  In travelling to England in search of a career, he had left behind a loving wife (Bhise) and meddling mother back in India.

Patel and Irons both give strong performances but the arguments between their respective characters become repetitive.  Neither wants to yield despite obvious merit in each other’s position.  Further, the subplot involving his family back home in India is distracting and needed to be cut or given more importance.

The Man Who Knew Infinity is an interesting tale on paper but Matt Brown struggles to bring that same sensation to the screen.