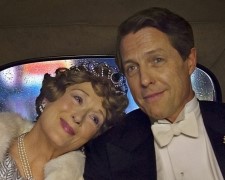 Based on actual events, this film is the true story of Florence Foster Jenkins – a wealthy heiress from New York who became a renowned opera singer in the early 20th Century.  Jenkins was not known for her talent.  Rather, people flocked to see her perform because of how bad she was.

It’s odd to be talking about this story so soon after the release of Marguerite.  The narrative is largely the same.  My plot overview in the opening paragraph is largely a “cut and paste” job from my review two weeks ago.  The major point of difference is that Florence Foster Jenkins has been shot in the English language and comes with star power.  Both factors will have a positive impact on the box-office.

She’s flooded with scripts every year but Meryl Streep chose this particular role because her character is so “heartbreakingly funny”.  Jenkins liked to sing and her husband (Grant) allowed her to do so at small parties and get-togethers.  Friends of Jenkins applauded at her performances because they admired her courage.  Critics wrote positive reviews because they were paid to do so.  It was a giant charade that continued for years.

Things became immensely more complicated when Jenkins’ started to believe more in her own ability.  At the age of 76, she agreed to perform at New York City’s Carnegie Hall in front of 3,000 people on 25 October 1944.  It would be her one and only public appearance.  Despite the rumours of her dreadful singing voice, the event sold out weeks in advance and attracted celebrities such as Marge Champion and Cole Porter.

While Marguerite had darker undertones, writer Nicholas Martin and director Stephen Frears (The Queen, Philomena) have gone with a “lighter” approach for their adaptation.  It’s designed more as a crowd-pleaser and doesn’t want to probe too deeply into the intent of the respective characters.

The performances make the film more than worthwhile though.  Hugh Grant plays the charming husband who keeps his cards very close to his chest.  Meryl Streep has the fun of signing as poorly as possible.  As hard as it is to believe, both leading actors are overshadowed by comedian Simon Helberg who steals every scene as Jenkins’ well-paid pianist.  A mix of both nerves and giggles, he struggles to keep a straight face during rehearsals.

Two films is probably enough to sum up the life of Florence Foster Jenkins.  In the same vein as film director Ed Wood, she will be remembered for reasons she probably wouldn’t appreciate.