Review: The First Monday In May 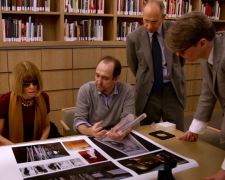 Located on the eastern outskirts of Central Park in New York City, the Metropolitan Museum of Art is the largest art museum in the United States.  A record 6.3 million people walked through its front doors in 2015.  The Met, as it is more commonly known, is closed on only 4 days each year – Thanksgiving Day, Christmas Day, New Year’s Day, and the first Monday in May.

While those first three dates will make sense, the last may leave some scratching their heads.  The reasons are explored in this riveting documentary from director Andrew Rossi.  Page One: Inside The New York Times showed that Rossi is intrigued by major institutions and what goes on behind the scenes.  That same curiosity was the key reason why he “yes” to this equally interesting opportunity.

The First Monday in May is centred on The Costume Institute, one of the numerous departments within the Met.  We follow curator Andrew Bolton as he plans a huge 2015 exhibition highlighting the influence of Chinese aesthetics on Western fashion.  The work begins months in advance and it’s fascinating to learn how many issues need to be resolved and how much thought goes into each tiny detail.  Bolton is a smooth, sharp operator.

The film’s other major narrative relates to the title itself.  On the first Monday in May each year, the Met hosts a fundraising gala to benefit the Costume Institute.  It is described as “the Super Bowl of social fashion events” and brings together a seemingly endless list of celebrities, politicians and sports stars.  Members from the public can attend (provided they have a spare $25,000) and the event raises more than $10 million each year.  It is all organised by Vogue editor-in-chief Anna Wintour and a team of passionate staffers.

Andrew Rossi has shot some amazing footage that makes this a compelling view from start to finish.  There’s seldom a dull moment.  Many would be familiar with the parodied version of Anna Wintour in The Devil Wears Prada (played by Meryl Streep) but here we see the real Anna and are offered an insight into her world.  She even touches on her reputation as an “ice queen” and speaks of the difficulties of being a woman trying to make it in a man’s world.

The film is also trying to stimulate a discussion about art, fashion and commerce.  Does fashion belong in a museum?  Can all fashion be described as art?  Does the hosting of a celebrity-filled ball drag undermine the artistic intentions of the Met?  Those weighing into the debate include designers Jean-Paul Gaultier and John Galliano, and filmmakers Baz Luhrmann and Kar-Wai Wong.

It’s hard to believe how much access was granted during the filmmaking process.  We see Wintour keenly discussing seating arrangements for the Met Gala (poor Josh Hartnett).  We see boardroom meetings where Bolton debates the exhibition’s content and design.  We see technicians accept delivery of dresses from around the world and prepare them for display.  We see celebrities arrive on the red carpet (Larry David a highlight) and then view the newly opened exhibition.  All of this has been skilfully edited into a tight 90 minutes.

I was in New York City last month but didn’t get a chance to visit The Met.  Having now seen The First Monday in May and been energised by the museum’s content, it’s a decision I regret.