Review: Teenage Mutant Ninja Turtles: Out Of The Shadows 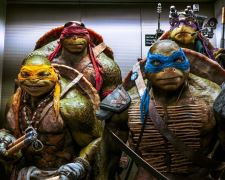 You only have to look at a release schedule to know that big movie studios are increasing their reliance on major franchises to make a profit.  Rather than fund 10 movies that cost $10 million each, they’d rather put all their eggs in one basket and go for a $100 million flick if there’s a strong chance it could spawn several sequels.

That was always the strategy behind the 2014 reboot of Teenage Mutant Ninja Turtles and thankfully, it has paid off for the executives at Paramount Pictures.  It grossed close to $500 million (USD) at the worldwide box-office and a follow up film was immediately given the green light.  There’s a new director this time around (Dave Green) but most won’t know the difference.  It has the same look and feel as its predecessor.

The villainous Shredder was captured at the end of the last film.  It therefore makes sense that this follow up begins with his daring escape from prison.  He’s not the only bad guy this time around though.  An alien is looking to build a transportation portal between his world and Earth.  He goes by the name of Krang and his end goal is world domination (pretty standard really).

There are a few more layers to the story.  Those familiar with the comics and cartoon series from the 1980s will know of Bebop and Rocksteady.  They’re two not-so-bright henchmen who are working closely with Shredder to get their hands on some special ooze for the benefit of Dr Baxter Stockman (Perry).

As for the turtles themselves, they’re not exactly a harmonious bunch.  Leonardo, Raphael, Michelangelo and Donatello are divided when it comes to many issues.  What approach should they take when trying to stop Shredder?  Should they finally come “out of the shadows” and reveal themselves to the public?  Could they use the mysterious purple ooze for their own use?

This is a film targeted at a younger crowd.  That statement will surprise no one.  It’s heavy on visual effects and the battle scenes are light and cartoonish.  The screenplay isn’t too bad.  It’s hard to feel tension in a movie this silly but the numerous subplots should hold the attention of the target audience.  The in-fighting amongst the Turtles also adds an interesting layer that’s reminiscent of the recent Avengers movies.

Adults may prefer a few more jokes (or perhaps something a touch darker) but kids will be the ones driving up the box-office over the coming weeks.  I’ll be surprised if we don’t see another Teenage Mutant Ninja Turtles flick within in the next two years.  They’ll never win an Oscar but they serve an entertaining purpose.