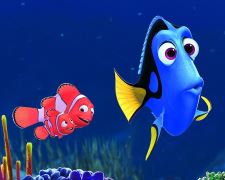 A total of 6 sequels are being released in Australian cinemas during June but two of them stand out because of the length of time “between drinks”.  Next week, we’ll finally get to see Independence Day: Resurgence some 20 years after the release of the original.  The gap isn’t quite as large in this case but given that 2003’s Finding Nemo was Pixar’s biggest box-office hit up until the release of Toy Story 3, it’s a little surprising that we’ve waited 13 years for a follow-up.

The storyline here isn’t overly adventurous.  The 3-person writing team have played it safe.  In the original, Marlin (Brooks) and Dory (DeGeneres) went in search of the missing Nemo who had been captured by scuba divers in the Great Barrier Reef.  This time around, it’s Dory who is need of help.  She wants to locate her mother and father who she hasn’t seen in many years.  She can’t even remember how they became separated due to her short-term memory loss.

The film isn’t afraid to mock its own premise.  Reluctant to go on another adventure, Marlin is quick to state that “crossing the ocean is something you should only have to do once in your life.”  He doesn’t really have a choice though because he feels indebted to the irritating Dory.  Perhaps “irritating” isn’t the perfect word but her continual forgetfulness, which is drummed home again and again, is a challenge for people to deal with.

Their search for Dory’s parents takes them to a marine park in coastal California.  There, she meets an assortment of new characters including a whale shark (Olson), a beluga whale (Burrell), and a sly octopus with a missing tentacle (O’Neill).  They all have a part to play.  So too does Sigourney Weaver in a humorous cameo that will be over the heads of most kids.

Despite the odd adult reference, directors Andrew Stanton and Angus MacLane have stuck with the winning formula of entertaining children first and foremost.  The characters are adorable and the storyline is very easy to follow.  There are also plenty of positive, life-affirming messages about the importance of families and how they come in many shapes and forms.

Audiences of all ages will undoubtedly enjoy the beautiful sea landscapes which are rich in detail.  Everyone will have their favourites when it comes to the cast but I’ll always have a soft spot for Albert Brooks who gets his fair share of laughs as the cautious, conservative Marlin.  Other big-name stars landing roles include Ed O’Neill, Ty Burrell, Diane Keaton and Idris Elba.

As the major family film being released over the June school holidays, it’s clear this will be a huge hit.  It’s a more than adequate sequel to a much loved animated classic.