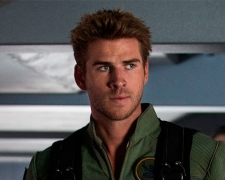 Tragedy has a way of uniting people.  In 1996, when the world was attacked by an alien race, the people of the world came together and emerged as the victors.  We’re told early in Independence Day: Resurgence that “world peace” has held strong in the 20 years since that fateful day.  Rather than waste time fighting each other, governments across the globe have been working together.  They’ve created armies, weapons and security outposts that can be utilised if the aliens should ever return.

That day is now.  Before we get to that though, the film spends roughly 40 minutes on character introductions.  Will Smith played the major hero in the original but for whatever reason, he hasn’t returned for this instalment.  His character has been killed off but his memory is not forgotten.  A painting of the late Captain Hiller is displayed prominently in the White House and his son, Dylan (Usher), is a valued member of the International Legacy Squadron that helps guard Earth.

Bill Pullman has returned but he is no longer the President of United States.  He keeps a low profile out of the public eye and is terrorised at night with dreams of another alien invasion.  His intelligent daughter (Monroe) works as a White House aide and she is currently dating an enthusiastic pilot (Hemsworth) who has been posted to the Space Defence Station which orbits the planet.  Let’s not forget Jeff Goldblum who returns as a scientist with an offbeat sense of humour.

This is a film with a few too many characters.  Judd Hirsch, Brent Spiner and Vivica A. Fox reprise their roles from the original while William Fichtner, Charlotte Gainsbourg, Sela Ward and Angelababy are amongst the new additions.  They have a part to play in the film’s plethora of subplots.  There are family arguments, romantic connections, power struggles, and heroic deeds.  If you get bored with something, just wait a minute and a new storyline will develop.

Let’s cut to the chase though.  The majority of audiences will be drawn by the fact it’s a sci-fi action flick.  After being defeated 20 years ago, the same alien species has returned to finish what they started.  They want to use their hi-tech machinery to draw energy from the planet’s core and in the process, annihilate every living thing.  The humans will have to use their brains to come up with a plan and use their brawn to implement it.

Independence Day was the highest grossing film of 1996 and it was also one of my favourite films of that year.  It found the right balance of light-weight humour and action spectacle.  This sequel tries to adopt the same formula but it doesn’t feel as compelling.  Perhaps it’s a sign that times have changed.  The cool flight battle sequences reminded of the recently rebooted Star Wars franchise but when I look deeper into the comparison, I realise that Star Wars: The Force Awakens has more to offer in terms of narrative and character interaction.  This all feels too easy and simplistic.

You can still have fun watching it though.  The aliens are freaky and you can’t help but root for the humans as they valiantly try to get the upper hand.  The ending also offers up room for more films.  We may have waited 20 years for this sequel but I was suspect we won’t be waiting a similar length of time for a follow up.