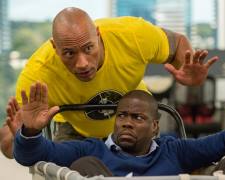 Kevin Hart is no stranger to the buddy comedy genre.  He’s played the “straight guy” opposite Will Ferrell in Get Hard and played the “funny guy” opposite Ice Cube in the Ride Along franchise.  Dwayne Johnson has plenty of credits to his name but this is the first time (in my memory anyway) that he’s part of defined comedy duo.  We’re more accustomed to seeing Johnson as the hero in big-budget action flicks (Fast 7, San Andreas) or as the single lead in board-reaching comedies (Tooth Fairy, The Game Plan).

Central Intelligence opens with a high school flashback.  Calvin (Hart) is the most popular senior in his class and everyone believes he’s going to do great things with his life.  He’s fit, he’s sporty, he’s intelligent, and he’s got a great girlfriend.  None of those descriptors would apply to Robbie (Johnson).  He is teased for being overweight and has no friends.  There’s a horrible moment where a group of bullies drag him from the locker room showers and parade him naked in front of a school assembly.

Slipping 20 years forward to the current day, we learn that the paths of these characters has changed significantly.  Calvin is an unhappy forensic accountant who isn’t respected by his work colleagues.  His home life is also a little bumpy with his wife (Nicolet) suggesting they see a marriage counsellor.  On the flip side, Robbie is now a gifted CIA agent with the body of a Greek God.  His secret to getting into shape?  Hitting the gym for 6 hours every day for the past two decades!

The three-person writing team needed to find a way to bring these two guys together and they’ve gone with a goofy premise.  Those within the CIA believe that Robbie is a double agent who is selling valuable satellite codes on the black market.  With seemingly no one he can trust, Robbie gets in touch with Calvin via Facebook and forces him to help.  He needs to use Calvin’s forensic accounting expertise to clear his name and identify the real criminals.

Central Intelligence is a film that feels low on ideas.  There’s a sequence in a warehouse where Calvin argues with Robbie about whether he is “in” or “out” with regards to this escapade.  A similar scene takes place a short time later in Calvin’s office.  Could they have not come up with something different to laugh about?

Johnson’s character is also a struggle to wrap your head around.  Robbie talks and acts like a hyperactive high school teenager throughout much of the film.  You may think it is part of some elaborate act but I wasn’t much wiser as the end credits started to roll.  A scene involving Jason Bateman (in a small cameo) only added to the confusion.  How did this guy become such a successful CIA agent given his emotional baggage and warped view of reality?  Why doesn’t he haven’t any friends despite his post-high school transformation?

Some jokes hit the mark.  Johnson and Hart argue back and forth and there’s the occasional barb or unexpected comment that will leave you chuckling.  Unfortunately, these two actors can’t save a script so poorly conceived.