Review: The Legend of Tarzan 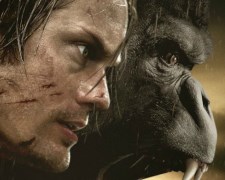 The story of Tarzan has been brought to the screen numerous times.  In its defence, it’s nice to see writers Adam Cozad (Jack Ryan: Shadow Recruit) and Craig Brewer (Hustle & Flow) not go with another bland origin tale.  It takes a little adjustment though.  It’s like watching the second series of TV show without having seen the first.  The story of how Tarzan was raised in the jungle and how he first met his American love-interest, Jane, is all told by way of very brief flashbacks.

The lack of a long-winded introduction creates more room for a fuller action adventure.  We first meet John Clayton (aka Tarzan) in London where he and Jane are now living a quiet, ordinary life.  That changes when is approached by an American messenger, George Washington Williams (Jackson), who suspects there is unrest in Congo.  Williams believes that the Belgian Government, who control part of the country, are illegally enslaving natives to help build a railroad and other infrastructure.

Clayton agrees to help and he heads to central Africa alongside his wife and the gun-toting Williams.  It turns out there is truth to the rumours.  A ruthless Belgian captain named Léon Rom has been instructed by his government to strip Congo of its valuable diamond deposits and use them to pay their government’s significant debts.  A tribal leader, Chief Mbonga (Hounsou), is willing to assist but on one condition – Rom captures Tarzan.  Mbonga wants revenge after Tarzan killed his only son many years ago.

What follows is a ho-hum action piece that struggles to get out of first gear.  Inglorious Bastards showed that Christoph Waltz can be a great bad guy… when given great dialogue to work with.  That’s not the case here.  He plays a cartoonish villain who has little to offer in terms of threats and intimidation.  When he captures Jane and tries to offer her up as bait, his simply describes his plan as “He’s Tarzan. You’re Jane. He’ll come for you.”

As Jane, Margot Robbie doesn’t have much to do.  Instead of moving with the times and creating a female character with depth and significance, the writers have stuck with the source material and portrayed her as the simple “damsel in distress.”  Alexander Skarsgård will excite some in the audience with his numerous shirtless scenes but it’s Samuel L. Jackson who earns “most valuable player honours” as Tarzan’s comedic offsider.

In a season cluttered with big-budget blockbusters, The Legend of Tarzan doesn’t stand out and is unlikely to leave an impression.