Review: Our Kind Of Traitor 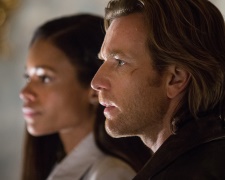 Few would doubt the writing talents of John le Carré.  The British author has penned more than 20 novels.  Several have been successfully adapted for the big screen including A Most Wanted Man (2014), Tinker Tailor Soldier Spy (2011), The Constant Gardener (2005), and The Spy Who Came in from the Cold (1965).

There’s a feeling of authenticity that laces all of the abovementioned films.  It never feels like you’re watching an over-the-top action thriller.  You get the sense that these events could actually have taken place.  That shouldn’t come as a surprise given Carré’s background.  He started writing back in the early 1960s when employed by the British intelligence agency MI6.  Many suspect his novels are based on truth but the reserved Carré keeps his cards close to his chest.

Our Kind of Traitor begins in Morocco with a British couple trying to get their rocky marriage back on track with a well-overdue holiday.  Perry (McGregor) is a jaded poetry lecturer who recently admitted to sleeping with a university student.  Gail (Harris) is a well-paid lawyer who cannot find a balance between her work and private lives.

Dining alone while his wife takes care of an important business call, Perry is approached by an extroverted Russian named Dima (Skarsgård) who invites him along to a party.  What follows is an evening that involves expensive booze, beautiful women, illegal drugs, and a few horses.  Perry doesn’t seem to have any regrets but he’s still puzzled as to Dima’s background and the entourage of security guards that follow him around.

The next day, Dima reveals his true identity.  He’s the top money launderer for the Russian mafia and he’ll soon be transferring a string of bribes to enable a Cypress-based bank to operate in London.  Included on the bank transfer list is a high-profile British politician (Northam).

Dima doesn’t want to betray his Russian comrades but he has no choice.  He knows he’ll be of no value to the mafia once the transfer takes place and it’s likely that he will be executed in the same manner as a close friend.  With no one else he can trust, he gives Perry a USB stick containing details of the money laundering and asks him to pass it onto MI6.  Dima’s hope is that he can then negotiate safe passage to the UK for both he and his family before it’s too late.

Our Kind of Traitor puts all of its key characters to the test.  Perry and Gail have to size up the situation and work out if it’s worth risking their lives to save that of a complete stranger.  Dima needs to formulate a plan that will allow him to communicate with Perry without attracting the attention of the Russian mafia.  A top MI6 agent in London (Lewis) must convince his own bosses that the evidence against the British politician is credible and should be acted upon despite a possible fallout with their Russian counterparts.  There’s a lot at stake and there are a lot of moving parts.

It’s taken longer than expected for this project to come to fruition.  Stars Ralph Fiennes and Mads Mikkelsen were originally attached alongside Australian director Justin Kurzel (Snowtown) but all three withdrew due to conflicting schedules.  British director Susanna White (Nanny McPhee and the Big Bang) eventually took to the helm.

While I wouldn’t have loved to have seen what Kurzel could have done with this material, White and writer Hossein Amini (The Wings of the Dove, Drive) have still crafted an interesting thriller.  There’s plenty to hold your attention, the characters act surprisingly sensibly, and there’s a worthy ending that fits neatly with the lead up.