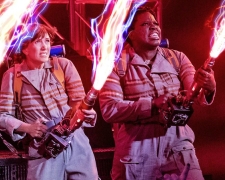 I use social media significantly less than I did 5 years ago.  I’ve been some terrific people and engaged in many constructive conversations but there’s an increasing nastiness that is difficult to avoid.  The ridiculous “controversy” surrounding this remake of Ghostbusters is proof in point.

Since it was released in early March, the film’s trailer has attracted more than 930,000 dislikes on YouTube (as opposed to just 265,000 likes).  That’s a record level of hatred for a movie trailer on YouTube and it now has a spot in the top 10 “most disliked” videos list alongside songs from Justin Bieber and Miley Cyrus.

The similar level of negativity can be found on the Internet Movie Database.  The film is yet to be released anywhere in the world and yet has already been rated by more than 8,000 registered users.  Of these, 55% have given it a score of 1 out of 10 – the lowest possible.  The average score from a male is 3.5 whereas the average score from a woman is 6.9.

I’m not the biggest fan of sequels and reboots but a film should always be judged on its own merits.  The disgust for this 2016 remake has been largely fuelled by a group of misogynist men who are outraged that Sony would choose to remake Ghostbusters with a cast of four women as opposed to four men.  I’d like to hope they’re a very small minority who can be ignored but when you look at the aforementioned figures, perhaps the group is larger than many believe.

Writer-director Paul Feig (Bridesmaids, The Heat) has done his best to make sure he gets the last laugh.  Early reviews have been positive and there are even a few jokes in the film targeted at online trolls which were added late in the process.  The adage that “any publicity is good publicity” might also prove true.  The unnecessary debate about the cast’s sex has pushed through into mainstream media and that may have a positive effect on the box-office.

The four lead characters this time around are Abby (McCarthy), Erin (Wiig), Jillian (McKinnon) and Patty (Jones).  They come from different backgrounds and have teamed up to form the Ghostbusters.  They operate from a rundown office atop a Chinese restaurant and their mission to rid New York City of a growing number of paranormal beings who are terrorising citizens.

Those closest to them are a hindrance, not a help.  Erin is sacked by her boss (Dance) at Colombia University for discrediting the organisation.  Mayor Bradley (Garcia) and his ruthless assistant (Strong) are squashing all ghost rumours so as not to scare the public.  Kevin (Hemsworth) is employed as the Ghostbusters’ receptionist but he is a self-absorbed dimwit who has zero skills to offer.

Feig’s film pays homage to the original with a similar narrative, a few well-timed cameos, and a revamp of the famous musical theme.  It’s got more to offer though.  He and co-writer Katie Dippold (The Heat, Parks & Recreation) have created a fun group of characters who work well off each other.  The biggest surprise is that the lesser known Kate McKinnon and Leslie Jones outshine both Kristen Wiig and Melissa McCarthy (who are still good but a touch repetitive).

The film’s weak spot is its storyline.  There’s a subplot involving the bullied janitor (Casey) at rustic hotel but it’s clumsy and doesn’t offer much.  The same could be said of the ghosts themselves who aren’t particularly entertaining (except for the fat one who drives around the Ghostbusters mobile).  Still, most non-misogynists should enjoy the ride and if the finale is anything to go by (stay to the very end of the closing credits), there’ll be more to come in the near future.