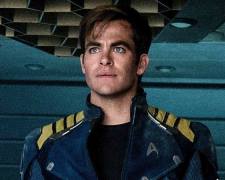 Peace is often taken for granted.  As this film opens, we see a tired Captain Kirk (Pine) lamenting about his job.  He and his crew are almost three years into a lengthy mission where they are scouting the far reaches of the universe and building alliances with other planets.  With no battles to be won, he’s bored and confused about what he is trying to accomplish.

Yeah… look…. Kirk has no right to complain.  He’s saved the universe repeatedly and he’s the much praised leader of a famed spacecraft.  We don’t get to see his pay slip but I’m guessing there are a few zeros at the end of his tax return.  Despite all of this, he’s thinking about stepping down as Captain and handing the reins to his wise first officer, Commander Spock (Quinto).

We don’t quite reach that point though.  Kirk and his crew travel to an uncharted nebula as part of a routine mission to help rescue the friendly crew of an alien ship.  They are then attacked by thousands of tiny spacecraft in the film’s best action sequence.  The USS Enterprise is destroyed, several members of the crew are killed, and the remainder use escape pods to flee to a rocky, desolate planet.

It’s at this point where characters are separated and numerous subplots are formed.  An injured Spock is nursed back to help by Doctor McCoy (Urban).  Scotty (Pegg) teams up with an alien woman named Jaylah (Boutella) to concoct an escape plan.  Sulu (Cho) and Uhura (Saldana) are taken captive by their attackers and held in a guarded room.  Kirk and Chekov (Yelchin) try to set off a distress signal and go in search of the others.

You always know how these types of movies are going to end.  The heroes will defeat the villains and will happily ever after (or at least until the next sequel is put into production).  Still, I was impressed by the bleak scenario crafted by writers Simon Pegg and Doug Jung.  Seeing the USS Enterprise being torn to shreds, I couldn’t help but wonder “how the hell are they going to get out this one?”  Their backs could not be more firmly pressed to the wall.

Perhaps that’s part of the reason why the film’s second half feels weak.  The crew spout a bunch of scientific words and come up with solutions that feel too easy.  There’s not much in the way of character progression either.  Buried under kilograms of make-up, Idris Elba tries to offer something new as the keynote bad guy.  He makes a few thought-provoking comments about the “need for war” but he doesn’t have much else to offer.

Star Trek Beyond isn’t a bad film… but it’s not a particularly interesting one either.