Review: Embrace Of The Serpent 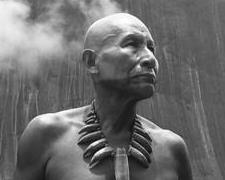 In 2003, the Colombian Government introduced legislation that would tax film producers, distributors and exhibitors across the country.  Its purpose was to create a fund that could be used to make local feature films and documentaries that offered insight into Colombian history and its people.  The government’s move has paid big dividends.  The number of movies produced each year has roughly tripled and the local share at the box-office has increased by an even greater percentage.

They took another small step forward this year when Embrace of the Serpent, a product of their growing movie industry, was nominated at the Academy Awards for best foreign language film.  Having submitted an entry on 22 previous occasions, this was the first time that a Colombian film had been included amongst the final 5 nominees.  It ultimately lost to Hungary’s Son of Saul but to steal the apt words from many Oscar acceptance speeches – “it’s an honour just to be nominated.”

Written and directed by Ciro Guerra, Embrace of the Serpent was inspired by the writings of two Westerners who explored the Amazon in the first half of the 20th Century.  They encountered numerous Indigenous tribes throughout South America and their writings helped bring attention to the region’s rich history and the way in which tribes operated.

Guerra’s creative screenplay uses two connected narratives.  The first is set in 1909 and follows Theodor (Bijvoet), a German explorer who is being guided up the Amazon River by a local shaman named Karamakate (Torres).  Theodor is looking for a sacred healing plant known as yakruna and Karamakate is looking for other members of his long-lost tribe.

The second storyline takes place in 1940.  Evans (Davis) is an American who has read the published works of Theodor and is following in his footsteps.  He has tracked down Karamakate (Bolívar), who is now an old man, and convinced him to travel up river in search of the same plant.

Embrace of the Serpent isn’t shy in showing the negative effects of Western influence in Colombian communities.  Tribes were accustomed to passing down knowledge from generation-to-generation and raising their children in line with long-held traditions.  Much of that was lost with the arrival of the “white man” who were keen to exploit slave labour and the country’s rich natural resources, including rubber plants, in pursuit of wealth.  One of the film's most powerful moments shows the aftereffects of an abusive Catholic priest who is trying to indoctrinate young kids.

The film offers more than a history lesson though.  It’s an intriguing character study where “trust” is a valuable commodity.  Motives are not always made clear.  Are Theodor and Evans genuinely interested in the lives of Amazonian people or do other goals take precedent?  Karamakate asks a serious of probing questions to determine if these explorers can indeed be trusted.

Filmed in Colombia’s Amazonía region, Embrace of the Serpent is stunning to look at.  Guerra used 35mm film (as opposed to digital camera) to best capture the intricate beauty of the location.  He also made the unusual decision to shoot in black & white to help recreate a simple time that was “completely devoid of exuberance and exoticism.”  Cinematographer David Gallego, who happens to be his brother-in-law, deserves praise for turning Guerra’s vision into reality.

Providing a voice to a group of people seldom seen on the big screen, Embrace of the Serpent is a must-see.