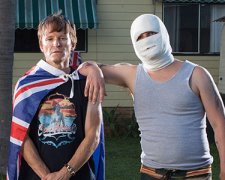 In 1905, Italian philosopher George Santayana penned the famous phrase – “Those who cannot remember the past are condemned to repeat it.”  History is littered with examples of prejudice, racism, discrimination and persecution.  Just when you think the human race has taken a few positive steps forward, fear takes hold and we regress back down the ladder.

The release of Down Under feels appropriate given the intense public debate that is currently taking place about Muslims in Australia.  As part of her policy platform, recently elected Senator Pauline Hanson wants to stop Muslim immigration, wants surveillance cameras installed in all Mosques, and has called for a government inquiry to determine if Islam is a religion.  The support for her party shows that she’s not alone in sharing such views.

Down Under takes us back ten years when a similar debate was taking place.  In late 2005, racial and ethnic tensions were building around the Sydney suburb of Cronulla.  There were regular altercations between “white” Australians and those of Middle Eastern descent.  It reached a tipping point on 11 December 2005 when riots began at North Cronulla Beach and more than 100 people were arrested.  The event became international news and it represents a not-so-great chapter in Australia’s history.

Writer-director Abe Forsythe (Ned) opens this film with actual news footage from that day.  It provides a quick reminder of what took place and the number of people involved.  He follows that with a fictional tale set against the backdrop of the riots.  It provides perspective and also helps us understand the mindset of the rioters.

There are two distinct “car loads” of characters.  One features a group of white Australians who are looking to take the riots to neighbouring suburbs.  They are led by Jason (Herriman), a middle-aged guy who feels emasculated at home and is keen to “beat up some wogs.”  The other group consists of four Lebanese men.  They include Nick (Romahn) who is out for revenge after the previous day’s riots and Hassim (Younes) who is trying to locate his missing brother.

This is a film that doesn’t take a particular side.  While all these characters show glimpses of intelligence and likeability, there’s an underlying stupidity that has set them on a collision course for disaster.  It also highlights the danger of peer pressure within adult groups.  A dominating, misguided leader can impair the viewpoints of those who think differently.

Forsythe has taken a big chance in framing his movie at a dark comedy.  The early scenes had me worried that I was watching another Housos vs. Authority sequel.  Some will be lured into laughing with these characters as opposed to laughing at these characters.  Thankfully, my concerns were dispelled by a gutsy finale that pulls the rug from under the audience.

Complete with a few unexpected soundtrack choices, Down Under packs a strong emotional punch and asks us to take a good, hard look at ourselves.

You can read my interview with writer-director Abe Forsythe by clicking here.