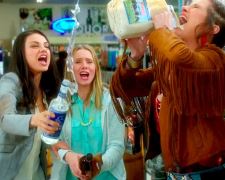 It’s not easy being a mother but things have seemingly spiralled out of control for Amy Mitchell (Kunis).  She works for a coffee company where she’s paid a part-time salary and asked to work full-time hours.  She has two kids that she has to take to school, to soccer games, and to piano lessons.  She has a husband that “feels like a third child” and offers no support when it comes to grocery shopping and volunteering for the local Parent-Teacher Association (PTA).  Amy concedes that because of her over-committed schedule, the only thing she’s good at is being late.

Her frustrations reach a tipping point when she intends an emergency meeting that has been called by Gwendolyn (Applegate), the domineering PTA President.  She’s trying to organise a bake sale to raise money for the school and has a seemingly endless list of demands.  She even wants to create a Bake Sale Task Force to monitor “treats” to ensure they don’t contain products that might be bad for children.

After getting up in front of everyone and telling Gwendolyn to effectively get stuffed, Amy heads to a bar and meets two other women in search of help.  Carla (Hahn) is a single mum with a teenage son who she battles to connect with.  Kiki (Bell) is a struggling mother of three with a controlling husband.  The trio vent about the “pressure to be the perfect mum” and release their anger by going on an all-night bender.

When the dust settles and the hangovers dissipate, Amy, Carla and Kiki decide to transform their lives.  They are no longer going to be tired, quiet servants who are continually at the disposal of everyone else.  They want to spread the workload around so that they’ve got more time for themselves.  High on Amy’s agenda is having a spare half-hour of a morning to have a proper breakfast.

There’s not a lot of depth or nuance to this story.  There are a few stereotypical characters such as Amy’s deadbeat, one-dimensional husband.  It therefore makes it an easy choice when a new heartthrob (played by Jay Hernandez) sweeps Amy off her feet.  The kids in the film also seem to disappear at opportune times.  It’s okay to be a “bad mom” at times but you don’t want to slip into “neglectful mom” territory.

All of that said, my mild criticisms are more than compensated by the amazing comedic chemistry generated by the film’s three stars – Mila Kunis, Kristen Bell and Kathryn Hahn.  Their respective characters couldn’t be more different.  Guided by writers John Lucas and Scott Moore (who wrote The Hangover), they have crafted a number of “laugh out loud” moments and shrewd one-liners.  It’s hard to pick a favourite scene but a moment where they all go through Amy’s wardrobe is still stuck in my memory.

I’ll acknowledge that the film’s message is drummed home a few times too often but Bad Moms is still one of the best comedies of 2016.  I can only hope that others feel the same way.