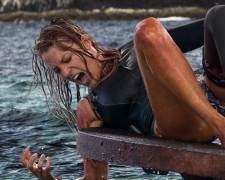 It feels like we get a new shark thriller every couple of years.  Jaws set the benchmark back in 1975 and recent films that have tried to match its intensity include Deep Blue Sea, Open Water, The Reef, Shark Night, and Bait.  You could also throw a bunch of Sharknado-type spoofs (e.g. Mega Shark Versus Giant Octopus) but they’d be found in the comedy section of the few remaining video stores.

The Shallows is a minimalist effort from Spanish director Jaume Collet-Serra (Non-Stop) in the sense that it’s shot entirely in a single location and is focused on just the one actor.  Aside from the shark and Blake Lively, the only other member of the cast who gets a decent amount of screen time is a bird who is listed in the credits as Steven Seagull (a humorous reference to the well-known American actor).

Writer Anthony Jaswinski has crafted a simple backstory to help audiences cheer on the hero.  Nancy Adams (Lively) is a young surfer from Texas who has travelled to a secret beach in Mexico.  She’s not there solely for the big waves.  Her mother recently died of cancer and Nancy wants to honour her memory.  She carries a photo of her mother who stood on that same beach 25 years earlier.

In case you’re wondering, you don’t need to travel to Mexico to lay your eyes on this beautiful location.  The exterior shots were filmed on Lord Howe Island which is located 600km east of Port Macquarie, New South Wales.  One might think it’d be great for tourism but the population of the island is limited given it’s a UNESCO World Heritage Site.  The remaining scenes were shot in a tank at the Village Roadshow Studios here on the Gold Coast.

Let’s cut to the chase though.  This is a shark movie.  Nancy spends the whole day surfing and is ready to catch that “one final wave” before heading back to her hotel.  Lo and behold, she is attacked by a giant shark that leaves a deep cut in her left-hand thigh.

She seeks refuge on a tiny rock in the middle of the bay but is now stranded.  The shark is circling and there’s no way to swim to shore.  There’s no one in the area that can hear her screams for help.  Her injured leg is in desperate need to medical attention.  Oh, and the tide will eventually rise to a point where her rocky safe haven will be engulfed.  The bottom line is that she has big problems.

The script itself doesn’t have much to offer.  There’s a silly, unnecessary subplot at the start where Nancy is called by her father who is unhappy that she’s dropped out of medical school.  Some of the “battles” that Nancy has with the shark are borderline comedic.  A particular scene involving glowing jellyfish springs to mind.

The film has its moments though.  It offers intrigue as you wonder Nancy is going to extricate herself from this situation.  Collet-Serra makes good use of music and camera angles as the shark makes it move.  He also throws in a few red herrings to keep audiences on their toes.  Two fellow surfers make a brief appearance and their demise is one of the film’s highlights.

Jaws this is not.