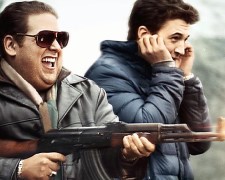 I heard someone describe this as the lighter version of The Wolf of Wall Street and it’s an apt reference.  It’s a film that highlights the dark side of capitalism.  Efraim Diveroli (Hill) and David Packouz (Teller) are two twenty-something-year-old entrepreneurs who have started a small business and are selling arms to the United States to be used by the military.  They both admit that they’re anti-war but the overriding factor if that they’re both “pro money”.

A few details have been changed to make it fit the traditional movie narrative (e.g. their trip to Iraq never happened) but this based on actual events.  When we first meet our two protagonists, the year is 2005 and they’re catching up for the first time in years at the funeral of a friend.  David admits that life isn’t going as planned.  He dropped out of college, got fired from his first 6 jobs, had a falling out with his parents, and is now a 22-year-old masseuse getting paid $75 an hour.

Efraim has been a little more successful.  He started out by buying weapons at police auctions and then on-selling them to the public.  It’s a lot of work though and he’s decided to transform his business by focusing on the world’s biggest “gun nut”.  That single customer he is referring to is the United States Government.  Efraim acts as the middle man.  He bids for small weapons contracts through the government’s tendering system and if successful, he tracks down the suppliers who can supply the arms that are required.

For a while, things are great.  These guys stick to small, simple deals and it’s not long before they’re driving around in Porches and living in luxurious, high-rise apartments.  That’s not enough though and I can’t help but think of a line from Mr. Burns in The Simpsons – “I’d trade it all for a little more.”  Efraim and David win a $300 million contract to provide bullets to the Afghan military and now appear to be out of their depth.  To get the job done, they’ll need to commit fraud and deal with dodgy individuals.

Directed by Todd Phillips (The Hangover) is largely framed as a comedy.  There’s a scene for example where the two guys are trying to negotiate the release of weapons from a customs warehouse in Jordan and end up using an 11-year-old as part of the negotiation process.  While I don’t mind the comedic approach, it does feel like these characters aren’t being judged harshly enough.  The finale is also messy in that certain actions aren’t well explained.  For example, why wasn’t Efraim paying the box maker in Albania?

This is still an interesting “truth is stranger than fiction” tale though.  It’s hard not to be surprised by the simplicity with which these guys were able to exploit the government’s procurement system and disregard international laws.  It’s not explored enough but Phillips and his co-writers also touch on the theme that wars create their own “economy”.  There are plenty of conflicted individuals who profit from the human tragedy.

Miles Teller (Whiplash) and Jonah Hill (Moneyball) are both strong in the leading roles.  They’re a big part of the reason why this film will entertain many who take the time to see it.