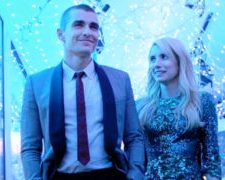 Kids spend too much time on their phone.  Kids are subject to peer pressure.  Kids do dumb things.  None of these statements are ground breaking.  Drawing from Jeanne Ryan’s 2012 young adult novel, screenwriter Jessica Sharzer (American Horror Story) has crafted a teen-orientated thriller that highlights these very themes.

Our hero is a character we’ve seen before.  Vee (Roberts) is about to finish up at high school and is unsure about whether she should leave her fragile mother (Lewis) and attend college.  She’s got a major crush on the star on the football team but is too shy to talk to him.  She doesn’t realise that her closest male friend (Heizer) is madly in love with her.  Oh, and her best friend is a bossy cheerleader (Meade) who is forever stealing the attention.

Trying to break free from her own timid personality, Vee signs up to an online phone application called Nerve.  Those who choose to “play” are given dares which they must complete to win money.  Those who choose to “watch” pay a small daily fee and watch live footage of the dares on their phones, tablets and computer screens.

An interesting aspect of the dares is that they draw from all knowledge available about each person on the internet.  After scrolling through Vee’s social media accounts, an algorithm selects a dare that will rattle her comfort zone.  She’s given 2 minutes to walk into a crowded café, find a stranger, and plant her lips on him for 15 seconds.  The prize is a generous $100.

The lucky guy receiving the kiss is Ian (Franco), a fellow Nerve competitor.  They’re asked by the game to team up and complete a series of increasingly difficult dares.  It’s at this point where the film jumps off the deep end and loses all sense of reality.  How are people watching these dares unfold?  Fellow Nerve users conveniently pass by with their own phone cameras but how good can the footage be from a moving taxi?  What about all the parts when they’re not being filmed?  The Truman Show this is not.  I’d also like to know who’s paying $20 a day to watch this dodgy, fragmented footage.

The film’s most puzzling element is the character of Vee who changes her nature every 10 minutes or so.  She starts out as a smart, shy woman and within 24 hours has become a complete fool.  She has no qualms when the game asks her to walk along a fire ladder hanging precariously between two buildings (it’s suicidal stuff) and yet she’s passionately upset when the game induces a petty stoush with her best friend (which is easily forgivable).

As the film enters its third and final act, you realise that it’s not possible for it to be wrapped up in a logical fashion.  There’s a group of muddled subplots involving Vee’s worrying mother, a group of underground computer hackers, and a bunch of masked strangers who threw away their moral compass.  The cops would have no hope in piecing this all together.