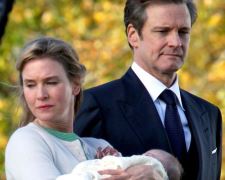 By way of a quick recap, Bridget Jones’s Diary (2001) chronicled our hero’s efforts to find a boyfriend.  She wisely decided against the slimy Daniel Cleaver (Hugh Grant) and went with the slightly awkward Mark Darcy (Colin Firth).  The follow up, Bridget Jones: The Edge of Reason, followed her attempts to find a husband.  Mark Darcy was again the successful candidate but there were plenty of bumps along the way.

The opening scene of Bridget Jones’s Baby show that Bridget’s life has gone off the tracks yet again.  She’s at home, she’s alone, and she’s sitting on the couch in her pyjamas.  It may sound idyllic to some but it’s actually Bridget’s 43rd birthday.  Her friends have tried to drag her out to a nightclub but she’d rather sit at home and wallow in self-pity.  There’s no supportive husband by her side because there was no wedding.  Despite the upbeat ending at the end of the previous film, Mark and Bridget had their differences and went their separate ways (for reasons that aren’t well explained).

What happens next is something that Bridget would never have predicted.  Coerced into attending a large musical festival, she has a one night stand with Jack (Dempsey), a handsome, middle-aged guy who she meets in humorous circumstances.  Several days later, she is reunited with the now married Mark Darcy at a christening and after a few drinks, another bedroom session ensues.  A pregnancy test subsequently comes back with a positive result and the identity of the father is anyone’s guess.

The earlier movies were based on the published, well-read works of English author Helen Fielding.  A different path has been taken this time around.  Fielding’s third novel in the series, published in 2013, is set decades into the future and shows Bridget as an elderly widow with two grown up children.  Looking for something more audience and box-office friendly, the producers engaged Fielding to craft a new story that sits somewhere in between her last two books.  She was helped by co-writers Dan Mazer (Borat) and Emma Thompson (Sense & Sensibility).  Thompson is also the best of the supporting cast which highlights the benefits when you can write your own snazzy one-liners.

The recently released Blood Father reminded us that Mel Gibson is still alive and still has a strong screen presence.  The same applies to Oscar-winning actress Renee Zellweger (Cold Mountain) as this marks her first role in 6 years.  In explaining her absence, Zellweger has told reporters that she was fatigued and in need of a break.  The lure of bringing this famed character back to life was clearly too hard to resist and it’s nice to see her back in action again.  She has an endearing charm that makes her a great fit for the clumsy, yet likeable, Bridget Jones.

Directed by Sharon Maguire, Bridget Jones’s Baby takes a little while to warm up.  It needs to explain the happenings of the past decade and the absence of Hugh Grant.  Some subplots don’t add much value either.  These include an election involving Bridget’s mother (Henderson) and another involving Bridget’s boss and her plans to change a news-based television show.

The film is at its best when it brings its three leading actors together.  Their light-hearted battles and arguments provide more than enough laughs to make this an entertaining experience.