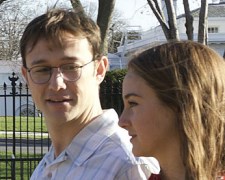 If you’re interested in learning about the actions of Edward Snowden, nothing can surpass Citizenfour, the 2014 film that won the Academy Award for best documentary feature.  It provided the actual, “real time” footage of Snowden as he went from a complete unknown to one of the world’s most wanted men.  You see his actions and you understand his thought process.  It’s hard to think of an equivalent in modern cinema.

It’s easy to see why Oscar winning director Oliver Stone (Platoon) was attracted to the idea of bringing a Hollywood-ised version of Snowden’s story to the big screen.  Stone is anti-establishment and is often critical of the U.S. Government.  In 2012, he directed a 10-part documentary called The Untold History of the United States.  It provided a different spin on the darker chapters in America’s past that are often misreported.

Most audiences will be familiar with Snowden but knowledge will vary in terms of his precise actions and the “crimes” he committed.  To sum it up quickly, Snowden held a number of positions within the Central Intelligence Agency (CIA) and National Security Agency (NSA) between 2006 and 2013.  He became increasingly concerned about the surveillance of ordinary American citizens and the inordinate amount of data that was being collected.  In May 2013, he stole classified documents and “blew the whistle” with help of trusted journalists.

Stone’s film doesn’t come across as too “preachy”.  Yes, it leans a certain way but there’s enough scope for viewers to form their own judgement about these important issues.  Where should we draw the line between freedom and safety?  If you knew that every email and SMS you sent was in a database and that an intelligence agency could access your iPhone camera at any time, would that be acceptable if it helped reduce the risk of terrorist attacks?  Are you worried in any way that the data would be misused?

The film also offers insight in the world of whistleblowing.  Governments around the world have enacted legislation that protects whistleblowers but when it’s the government that’s being criticised and embarrassed, things aren’t as simple.  Snowden was charged under the Espionage Act and has spent the last 3 years of his life in Russia after seeking asylum.  Was it worth it?  Again, it’s a question for audiences.

Stone and co-writer Kieran Fitzgerald have created some sharp dialogue to add to the film’s impact.  Nicolas Cage makes a cameo appearance as a frustrated CIA professor who laments that “you would think that intelligence would count for something in the intelligence business.”  Rhys Ifans offers a counter view as a high-ranking CIA official trying to justify his agency’s surveillance methods – “secrecy is security, and security is victory.”

Snowden boasts a strong cast with Joseph Gordon-Levitt (The Walk) deftly illustrating the moral quandaries of the title character.  That is most evident when the film delves into Snowden’s home life and the stress of having to keep things hidden from his long-time girlfriend (played by Shailene Woodley).  He’s at a much better place mentally when he meets with journalists in Hong Kong and is finally rid of the heavy burden he has been carrying.

Encapsulating plenty of material inside of its 134 minute running time, Snowden will add to the growing debate about the reach of government, rightly or wrongly, into our lives.