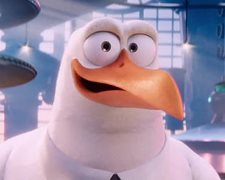 Storks is a family flick but adults will find humour in its corporate setting.  Once upon a time, storks flew across the skies and delivered babies free of charge.  That was it.  Realising there was money to be made, those in charge on Stork Mountain decided to change the strategic plan.  They got out of the “baby business” and created a global online retailer called Cornerstore.com that listed on the stock exchange.  The public order goods from the website and the storks deliver them straight to their doorstep.

The film’s leading bird is a Junior (Samberg) – a high-flier who on track to be the company’s next Chief Executive Officer.  He’s been promised the top job by the current boss (Grammer) on the condition that he deal with an ongoing issue.  Two decades ago, a stork lost the delivery instructions and failed to deliver a newly born baby to its parents.  With no other options available, the storks raised her as one of their own and she’s now an employee of the company.

The problem with Tulip (Crown) is that she’s hopeless.  She can’t fly so she’s of no help in delivering goods.  She tries to help out around the factory but she’s clumsy and continually makes mistakes.  Junior’s instructions from the boss are simple – get rid of her.  There’s no chance of the company’s share price increasing with underwhelming employees such as Tulip dragging the organisation down.  It’s another of the film’s capitalist themes.

As all this takes place high in the sky, there’s another narrative being followed on the ground.  Nate is a young boy who yearns for a brother.  This is largely because his parents (Burrell and Aniston) are workaholic real estate agents who live by the company’s motto – “we never stop”.  They seldom spend any time with their son and it’s left Nate feeling bored and lonely.

These two storylines come together but I’d argue that things are a little too convoluted for younger audiences.  There’s a lot to understand and a lot that might require explanation.  There are still some signature moments however.  The film’s highlight is a fight sequence atop a high rise building that involves a sleeping baby.  You’ll be smiling regardless of your age.  The same applies to a group of shape-shifting wolves who hunt using unique methods.

He doesn’t get a lot of screen time but a sneaky pigeon is the film’s most memorable character.  He also has his eye on the CEO role and is keen to embarrass Junior at any opportunity.  Of the cast, the voices of a stressful Andy Samberg and a conniving Kelsey Grammer stand out best.

Written and directed by Nicholas Stoller (Bad Neighbours) eventually wins favour with a sweet finale but the chaotic happenings in the lead up don’t leave much of an impact.