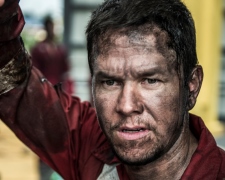 Given it took place only 6 years ago, many will already be familiar with the events that took place off the coast of Louisiana on 20 April 2010.  An explosion occurred aboard the Deepwater Horizon oil drilling rig.  Lives were lost, a huge amount of oil spilled into the Gulf of Mexico, and it was described as the “largest environmental disaster in U.S. history.”

The first half of the film is spent getting to know the key characters and the cause of the accident.  It’s evident from the early scenes.  While director Peter Berg (Friday Night Lights, Lone Survivor) has given it a documentary-like feel, it’s a Hollywood-ised version of what actually took place.

This is most evident during two sequences that tap into our superstitious nature.  Electronics technician Mike Williams (Wahlberg) is in his kitchen explaining to his daughter how an oil rig works.  A coke can is used as a prop but it explodes onto the kitchen table.  Yeah, not a good sign.  Later that day, manager Jimmy Harrell (Russell) is preparing to escort a group of BP officials onto his rig.  He asks one of them to remove his magenta tie because such it’s the same colour as the warning light for dangerous gas levels.  It’s not hard to figure out what will happen next.

Before we get to that, the film needs to find someone to blame.  The person who has all the fingers pointed in his direction is Donald Vidrine (Malkovich), a well-paid BP executive who gave the order to commence drilling despite others raising safety concerns and calling it “the well from hell.”

Vidrine wasn’t afraid to articulate his reasons.  The project was overdue, the costs were blowing out, and it was putting the share price of the company at risk.  This is another part of the movie where truth blurs with fiction.  The actual event wasn’t as clear cut.  A government committee investigated the accident and spread the blame more widely amongst staff at BP and Transocean.

My early qualms about the film’s truthfulness were forgotten by the half way mark.  The explosion occurs, the action ramps up, and Berg’s movie transforms itself into an edge-of-your-seat survival tale.  It must have been a dream project for the sound technicians.  There are more explosions than a New Year’s Eve fireworks show.  The visual effects artists and stunt personnel also play a major part.

This is the best performance we’ve seen in a while from Mark Wahlberg (Ted) who is strong as the film’s level-headed hero.  Kurt Russell (The Hateful Eight), Dylan O’Brien (The Maze Runner) and Gina Rodriguez (Jane the Virgin) get less screen time but still make an impression (well, only when you can hear them speaking over the deafening sounds of the rig).

Offering one of the most intense action climaxes of the year, Deepwater Horizon is well worth a look.