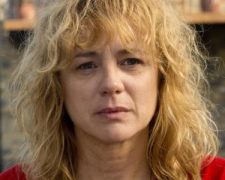 If you Google the term “Spanish film directors”, the first photo that comes up is of Pedro Almodóvar.  He is not just an icon in his home country.  Over the last 30 years, he has put together a superb resume that has earned him the respect of film lovers across the globe.  He won Oscars for All About My Mother (1999) and Talk To Her (2002).  His other works include Women on the Verge of a Nervous Breakdown (1988), Volver (2006) and The Skin I Live In (2011).

Julieta is the latest creation from Almodóvar and fans will recognise his fingerprints throughout. For starters, it’s a film with women at the centre.  The few men that appear in the film pop up in smaller, supporting roles.  It’s also an intriguing mystery.  The film is scant on detail in the opening scenes and then develops into something that you won’t see coming.

The movie opens by introducing us to the title character.  Julieta (Suárez) is a middle-aged woman who has spent a significant chunk of her of life in Madrid.  After a lengthy period living alone, she has finally found love in the arms of the successful Lorenzo (Grandinetti) and the pair are about to immigrate to Portugal so as to start a fresh chapter in their lives.

Julieta’s plans change when she runs into woman on the streets of Madrid.  Her name is Beatriz (Jenner) and she was the close childhood friend of Julieta’s only daughter, Antía.  She mentions that she recently spoke with Antía who is now living in Switzerland with her husband and three children.  It may sound like a simple, innocuous statement but it strikes Julieta like a bolt of lightning.  Her daughter has been missing for more than a decade and Julieta didn’t even know if she was still alive.

This unexpected encounter releases the dam on a flood on memories.  Julieta sits at her desk, opens the first page of a blank journal, and starts writing.  She begins with – “I’m going to tell you everything I wasn’t able to tell you.”  It clearly intended for Antía and implies a fractured history between mother and daughter.  Julieta needs to get something off her chest and the journal is her outlet.

With the stage set, Almodóvar’s screenplay delves into the past by way of flashback.  We see the younger Julieta (Ugarte) at several key events in her life.  It includes the moment where she meets Xoan (Grao), an already married fisherman who would later become Antía’s father.  That’s about all I’m willing to reveal in terms of story.  The less you know going into the film, the better.

This is a powerful piece of cinema.  Emma Suárez is stunning as the older version of Julieta.  You will get a clear sense of the confusion and heartbreak that has tormented her for so long.  It’s as if a hand is pulling her back into the past and preventing her from moving forward to a more promising future.  A brooding film score from composer Alberto Iglesias further adds to the film’s unsettling vibe.

Selected as the Spanish entry for the foreign language film category at next year’s Academy Awards, Julieta is for admirers of Almodóvar and for those who enjoy a mystery fuelled by the darker elements of human nature.