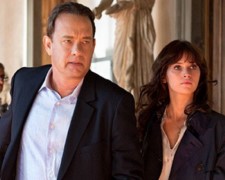 To its credit, Inferno has a villain with a thought provoking motive.  It refreshingly goes against the mould of standard action films where bad guys concoct bizarre plans to go in search of wealth and power.  That’s not the case here as evidenced by the very opening scene.  Bertrand Zobrist (Foster) jumps off the top of the church and commits suicide.  He certainly wasn’t going to wait around and be killed by the hero (as is tradition).  He was happy to do that himself.

There was a method to his madness.  Zobrist was an eccentric billionaire who was worried about the rapid rate at which the world’s population was increasing.  We see a video of him speaking at a seminar where he mentions that it took the world 100,000 years to reach a population of 1 billion and yet we’ve grown to almost 8 times that size in the space of two centuries.  If that trend continues, it’s only a matter of time before the planet becomes overpopulated and there won’t be enough resources for us all to survive.

He refers to some of history’s great plagues.  While many would see them as a dark chapter in our history, Zobrist takes a contrasting view.  They helped reduce the population and kept it from rising at an unsustainable rate.  It’s why he’s spent two years developing a virus to create a plague that will trump all others.  He believes that we need to kill half of the planet now or run the risk of us all dying in the near future.

Inferno marks the third adaptation of a Dan Brown novel.  The 2006 release of The Da Vinci Code was followed by Angels & Demons three years later.  Tom Hanks reprises his role as Robert Langdon, one of the world’s leading professors of religious iconology and symbology.  He doesn’t have a look of a traditional action hero (he’s actually a bit of a nerd) but there’s seemingly no mystery he can’t put together.  He’s not too bad at bullet dodging either.

He has reluctant found himself caught up in the search for the virus so he can prevent it from being released.  This time around though, he doesn’t have the clearest of heads.  It’s Monday evening and he wakes up in a hospital bed in Florence with a splitting headache and a bleeding scalp.  He doesn’t know how he got there.  The last memory he had was being back home in Boston on the Saturday.  Dr Sienna Brooks (Jones) diagnoses him with acute amnesia and believes his recent memories will soon return.

There’s not a lot of time though.  A policewoman turns up at the hospital and tries to kill Langdon.  She’s not the only person on his tail.  Three separate groups of people are trying to locate him for reasons that won’t become clear until the film’s second act.  Langdon isn’t sure who he can trust and the audience will find themselves in the same position.

It’s never easy translating book to screen but this is a few notches below the earlier two movies.  There’s an unnecessarily long introduction where director Ron Howard (A Beautiful Mind) uses a mix of blurred images and dream-like sequences to take us inside Langdon’s head.  It’s all a bit too messy and repetitive and you’ll be anxious for the action to get started.

Langdon isn't doing much this time around.  There are a couple of puzzles to solve but the more prevalent scenes involve him running from the authorities Jason Bourne style.  Drawing from Dan Brown’s novel, screenwriter David Koepp (Jurassic Park) tries to spice things up with a few twists but again, the characters appear to be relying more on good luck as opposed to good planning.

Brown’s books have captivated readers but I’m not convinced this film adaptation will do the same.