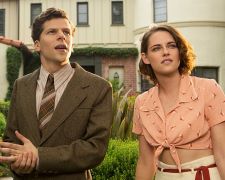 He may have turned 80 years of age last December but Woody Allen keeps making films and he keeps doing things he own way.  He’s also one of his harshest critics.  Allen refuses to watch his own films once complete and believes that there’s only a handful of them that are actually any good.  He doesn’t read reviews, he hates having to do publicity and he seldom goes to the cinema.

Café Society begins in the same manner as other Allen films.  The opening credits are shown in simple white writing against a black background, the actors’ names are listed in alphabetical order, and a crackly 1930s-type tune plays in the background.  These credits culminate with the words “written and directed by Woody Allen” and then it’s time for the movie to begin.  It’s a routine that he’s used so often that it ought to be trademarked.

Allen’s latest outing was inspired by his own as a teenager.  He would be fascinated by the powerful talent agents in Hollywood and their influence within the film industry.  Set in the 1930s, Café Society is structured around three characters.  Phil (Carell) is the fast-talking talent agent who oozes success.  He has a beautiful mansion, a deep wallet, and appears to know everyone in industry.

Arriving at the door of his office one day is Bobby (Eisenberg), his nephew who was moved from New York to California in search of work and other opportunities.  Phil doesn’t have much time for Bobby and so he creates a small, pointless job requiring him to makes deliveries across town.  He proclaims that he doesn’t want to “overemphasize the nepotism.”

This is ultimately a love story and the person who comes between them is Vonnie (Stewart).  She acts as Phil’s secretary and the two have been having an affair for a year.  Vonnie has a few doubts about their future but it’s hard to get inside her head.  Is she worried because Phil has been making empty promises about leaving his wife?  Or is it that she’s not truly love with Phil and has been seduced only by his wealth and power?  These concerns push her into the arms of the naive Bobby and a complicated love triangle ensues.

I’m a long-time fan of Woody Allen (and always will be) but this is well below his best work.  It’s a choppy story in that there are several subplots that detract from the main show.  One involves Bobby’s brother back in New York who has become a gangster/murderer.  The relevance of these detours is revealed in the film’s later stages but they don’t add up to as much as you might hope.

Allen has clearly enjoyed recreating 1930s and throws in numerous references to real life people at the time (largely actors and filmmakers).  This technique worked successfully for him in Midnight in Paris but this time around, feels like more of an unnecessary name-dropping exercise.  Of the cast, Jesse Eisenberg does his best to mimic Woody Allen traditional on-screen persona (evidenced by a scene with a prostitute) but it’s Kristen Stewart who impresses most as the likeable starlet torn between two suitors.