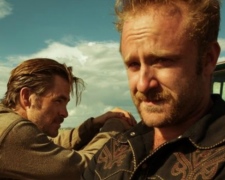 Having made roughly $30m, Hell or High Water is one of the highest grossing independent films in the United States this year.  A clear point of attraction is the quality cast.  If you’ve got a total production budget of $12m, you’re doing well if you can get the faces of Jeff Bridges, Chris Pine and Ben Foster on the poster.  Names aren’t everything though.  Audiences have also been lured by the strong word of mouth and having now seen the film, it’s easy to see why.

Written by Taylor Sheridan (Sicario) and directed by David Mackenzie (Young Adam, Hallam Foe), Hell or High Water begins with a robbery.  Toby (Pine) and Tanner (Foster), two middle aged brothers from West Texas, steal a small sum of money from two banks.  These heists are well planned.  They’ve picked quieter banks with easy getaway routes.  They wear gloves and ski masks to help conceal their identity.  They only take small bank notes ($20 and under) as they are much harder to trace.

These guys aren’t driven by greed.  They’re not looking to steal millions of dollars and then move to a beachside mansion in Cuba.  Toby is after revenge and redemption.  His mother recently passed away and title of the family ranch was transferred to him.  Unfortunately, it’s subject to a reverse mortgage and the bank will be seizing ownership if the outstanding debt is not repaid within a few days.  It’s no coincidence that he’s stealing from the same predatory banks who had been harassing his mother up until her death.

Toby doesn’t want the property for himself.  Having failed to pay child support to his ex-wife and two sons for several years, Toby sees this as a way of making things right.  He intends to set up a trust whereby his children get ownership of the ranch to ensure they won’t grow up poor like he did.  Tanner, fresh out of a lengthy stint in prison, has been promised nothing from the transaction but is keen to help is brother out of a sense of loyalty.

The film offers a second perspective which is given equal weighting.  Marcus (Bridges) is a soon-to-be-retiring Texas Ranger charged with the investigation of the robberies.  He is assisted by his partner, Alberto (Birmingham), and their playful, comedic banter provides a nice break from the film’s otherwise dark tone.  They get the sense that the perpetrators have other banks in mind and need to predict their next move.

This is a damn good film and your feelings about the characters will oscillate throughout.  Toby and Tanner are committing crimes but they’re doing so out of a sense of desperation.  It’s hard not to feel a little sympathy for their plight.  They’re far from perfect though.  Tanner makes several errors of judgement (such as early scene where he hits a bank manager with the butt of his gun) that threatens their plans and “nice guy” personas.

With a thick, muffled Texas accent, Jeff Brides (Crazy Heart) delivers the film’s standout performance.  His character is a little reminiscent of the one played by Tommy Lee Jones in No Country for Old Men.  He has a relaxed, laid-back attitude on the outside but a shrewd, calculator demeanour on the inside.  His experience in these situations is invaluable.

Sheridan’s screenplay deserves praise for not always succumbing to convention.  There are a few “red herrings” that are more about developing the characters rather than furthering the storyline.  This is typified in a scene where Marcus and Alberto are waiting for something to happen outside a dingy café.

The string-heavy music score from Nick Cave and Warren Ellis (Lawless, Far From Men) will stick with you as the credits start to roll.  So too will the finale which ends on a poignant note.