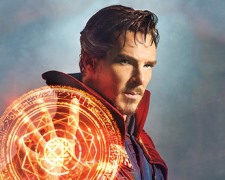 Doctor Strange is the fourth and final Marvel comic book movie of 2016.  It follows on the back of Deadpool, Captain America: Civil War and X-Men Apocalypse and sets up a few storylines that will be relevant in movies to come.  Another 9 Marvel flicks are slated for release over the next 3 years.  If you’re suffering from superhero burnout, you might need to attend a couple of foreign language film festivals to freshen up.

It’s apparent that Doctor Strange isn’t your standard superhero.  This is best articulated during a scene where a comparison is made with The Avengers.  They tend to fight with their fists and other man-made weapons they’ve created.  In the case of Doctor Strange, he fights with his mind.  He can harness powers within that allow him to teleport to other locations and create strong force fields.  He can also alter the path of time.  They add up to cool group of party tricks.

The purpose of these powers doesn’t become relevant until the film’s final act.  The first half is all about character development and backstory.  We learn that Dr Stephen Strange is one of the world’s leading neurosurgeons.  That success has brought out some of his not-so-great qualities.  He wastes money on frivolous desires (such as expensive cars) and he treats many of his hospital colleagues with disrespect.  This includes Christine Palmer (McAdams), a fellow surgeon that he expects to be at his beck and call.

Strange’s life is forever alerted when badly injured in a car accident.  His hands are rendered useless and his days as a neurosurgeon are over.  It’s a massive adjustment for self-reliant Strange who is accustomed to being in control and having power.  He now must rely on the support of others as part of his long rehabilitation program.

His efforts to regain his independence lead him to a secluded house in Nepal that is home to the Ancient One (Swinton), a mystic who sounds crazy but is actually quite knowledgeable.  She speaks of spells, sorcery and other worlds that exist but are kept hidden from the eyes of most humans.  Her motives aren’t 100% clear but she agrees to help Strange and it’s not long before he’s doing things he never dreamed possible.

This is an interesting origin story but Doctor Strange is more likely to be remembered for its impressive visual effects.  Director Scott Derrickson (Deliver Us From Evil) has borrowed a page from Christopher Nolan’s Inception and created a dream-like world where buildings move, streets fold over, and the laws of gravity are thrown out the window.  It sets the stage for unorthodox fight sequences.

The script successfully straddles a number of genres.  The action scenes are creative, the drama is easy to follow (except for a few complex character names), and there are a few well-timed laughs to add a necessary dose of comedy.  Cumberbatch portrays Strange as the reluctant hero who offers a few quizzical, sarcastic comments but quickly realises his value in saving the world.

Tilda Swinton has fun with a typical Tilda Swinton performance.  The same can’t be said for Rachel McAdams who is woefully underutilised as Strange’s quasi love interest.  I can only hope she’s given more to work with in future instalments.

Providing a finale that doesn’t rely on explosions and drawn-out punch ups, Doctor Strange earns points for being a little different.