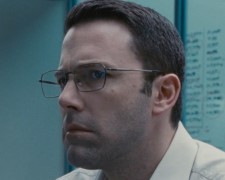 I confess to being a little more interested than the average moviegoer when it comes to The Accountant.  It’s what I do as a day job as film criticism doesn’t quite pay the bills.  The film opens with the traditional view of what accountants do.  Christian Wolff (Affleck) operates out of a small, gloomy office and is helping an elderly couple with their annual tax return.  They’re worried about a hefty tax bill but Wolff is bending the rules and strongly suggesting they throw in a few creative deductions.

Don’t fret.  This isn’t a two hour movie about capital gains tax and negative gearing.  Writer Bill Dubuque (The Judge) puts forward an intriguing scenario.  We know there are horrible people in the world who are involved in terrorism, bribery, trafficking and espionage.  Who maintains their financial records though?  It makes sense that even bad guys need a Chartered Accountant to keep tabs on their money.

That’s where Christian Wolff makes most of his fees – by helping out large criminal families and organisations.  He maintains the lowest profile possible but Wolff’s actions have finally caught the attention of Raymond King (Simmons), the Financial Crimes Director for the Treasury Department.  He has assigned one of his senior analysts (Addai-Robinson) the difficult task of locating Wolff and compiling enough evidence to put him behind bars.

Adding another layer to the narrative is the fact that Wolff suffers from severe autism.  We are shown footage of him as a child where he hates bright lights and hates being touched by others.  He completes a complicated jigsaw puzzle but then becomes distressed when one piece is missing from the box.  This helps us understand the Wolff we see today.  He expresses no emotions, he struggles with human interaction, and he cannot stop once he’s started a particular task.

To borrow the words from the Home Shopping Network – “but wait, there’s more!”  The Accountant seems to have more storylines than an entire series of Game of Thrones.  Wolff is engaged by a person on the phone with a muffled voice (subplot #1) to perform a forensic accounting assignment for a large robotics company (subplot #2) where he meets a young accountant (Kendrick) looking to know more about him (subplot #3) while being pursued by hired goons (subplot #4) and haunted by memories of his father (subplot #5).

I like being challenged as a filmgoer but there’s too much going on here.  The finale includes a lengthy monologue from J.K. Simmons that is only necessary because of the many plot gaps needing to be filled.  Without giving away some of the key plot twists, there are parts to the story that lack credibility and a scene in a well-armed house towards the end is a good example.

The film’s most positive quality is its exploration of autism.  It’s a condition we don’t see often on the big screen – especially in a big budget action-thriller.  For those not familiar, it will provide insight into those dealing with the lifelong development condition and the effect on those around them.  For those already familiar, it provides confirmation that those diagnosed with autism can contribute to society in the same way as everyone else.

Directed by Gavin O’Connor (Warrior), The Accountant bites off more than it can chew but at least it’s adding a bit of excitement to the accounting profession!