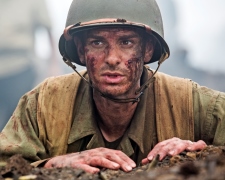 Sitting in the director’s chair for the first time in a decade, Mel Gibson’s latest tells the real life story of Desmond T. Doss (Garfield) – a United States solider who fought against the Japanese during the Battle of Okinawa in May 1945.  For his “conspicuous gallantry and intrepidity in action above and beyond the call of duty”, Doss was awarded the Medal of Honour by President Harry S. Truman.

What distinguishes this film from other World War II movies is the unusual set of eyes through which it has been told.  Doss was a “conscientious objector”.  Born and raised as a Seventh-day Adventist, he refused to kill another individual and refused to carry a weapon of any kind.  You might ask your question – why did he voluntarily enlist for the army?  His intention was to become a medic that would be “saving people rather than killing them.”

This school of thought didn’t sit well with his fellow soldiers who saw him as a coward and a major liability.  There’s a scene where an army sergeant (Vaughn) warns the others not to look to Doss to save them because “he’ll be too busy wrestling his conscience.”  What’s the point of going into battle against the well-armed Japanese if the solider standing beside you doesn’t even know how to hold a gun?

It seemed that everyone wanted Doss to quit.  He was criticised by his parents (Weaving, Griffiths) who didn’t want to lose another son to the war.  He was beaten by other soldiers until bruised and bleeding.  He was imprisoned by Captain Glover (Worthington) for not completing training and following orders.  He even missed his own wedding because of his steadfast refusal to quit the army.

The early stages of Hacksaw Ridge feel a little drawn out.  I gained a quick understanding of the character and was ready for the narrative to progress.  The screenplay delves into Doss’s past and analyses the relationship he had with his abusive father (Weaving).  His mother feebly attempts to justify her husband’s actions by saying “he don’t hate us, he just hates himself sometimes.”

The film makes its impact in the second half when Doss is sent to the frontline and the troops try to wrestle control of Hacksaw Ridge from the Japanese.  It’s a bloody, powerful sequence that is both tragic and uplifting.  Andrew Garfield speaks with a slow drawl and comes across as a touch dopey but it’s a good fit for the character.  He is a man driven by his beliefs rather than common sense.

The nominations for the 2016 AACTA Awards were unveiled last month (the Australian equivalent of the Oscars) and leading the pack with 13 nominations was Hacksaw Ridge, the latest effort from director Mel Gibson (Braveheart).  It’s an announcement that couldn’t be better timed given its release in Australian cinemas this week.