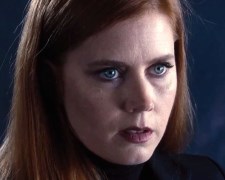 “Sometimes there’s so much beauty in the world, I feel like I can’t take it, and my heart is going to cave in.”  It’s an iconic quote from Sam Mendes’ Oscar winning American Beauty but it could equally apply to the films of Tom Ford.  This is only the second release from the fashion designer turned movie director (following 2009’s A Single Man) but he’s already developed a unique cinematic fingerprint.  From the cinematography to the costume design to the music score… Ford finds a way to make you pay attention and soak it all in.

As his sophomore film, Nocturnal Animals taps into a common theme – the struggle to escape one’s past.  Ford gets his message through by skilfully weaving three timelines together.  The story begins in the current day and is centred on 40-something-year-old Susan Morrow (Adams).  At a first glance, Susan epitomises the American dream.  She is married to a successful businessman (Hammer), she lives in a stunning home in Los Angeles, and she runs an highly regarded art gallery.

Susan is quick to acknowledge the success in her life but she doesn’t come across a bubbly, chirpy, content individual.  She confides in a close friend that she feels “ungrateful not to be happy.”  She bored at work and she’s grown increasingly distant from her workaholic husband.  It’s clear that whatever she wants out of life, she’s not getting it.

Her world gets an unexpected jolt when she receives a delivery in the mail from her ex-husband, Edward (Gyllenhaal).  The pair got married back when they were college students but divorced not long after and haven’t spoken in 19 years.  Edward had always wanted to be a writer and the package contains a completed manuscript which, as per the inscription on the front page, is dedicated to Susan.  Battling a mix of emotions, intrigue comes through strongest and so she sits down to read Edward’s ‘Nocturnal Animals’.

It’s at this point where the narrative fractures into its three parts.  The words on the page come to life and we are shown a visual representation of Edward’s fictitious novel through Susan’s eyes.  It’s the tale of man (also played by Gyllenhaal) consumed by revenge.  He seeks a group of thugs (led by Aaron Taylor-Johnson) who abducted his wife (Fisher) and daughter while travelling on an isolated road in Texas.  He is assisted by a local police detective (Shannon) who promises to “look into things around here”.

As we follow the novel and Susan’s reaction to it, the final timeline takes shape – that of the relationship between Susan and Edward two decades earlier.  To understand why Edward wrote the novel, you have to understand their past.  Without giving too much away, it’s this important piece that connects the other two narratives and leads to the film’s powerful conclusion (and also one of the year’s best).

Just as he did in A Single Man, Tom Ford has extracted quality performances from his high profile cast.  Amy Adams is superb as the film’s troubled protagonist and Jake Gyllenhaal distinguishes himself by playing two subtly different roles.  Michael Shannon has been tipped as an award season contender and it’s easy to see why with his portrayal as the scraggly police detective with a steely determination that burns within.

Evidenced by its eye-opening opening title sequence, Nocturnal Animals is also to be admired for its colours, lighting and imagery.  Cinematographer Seamus McGarvey (Atonement) provides a dark, colourless perspective of Los Angeles and a contrasting view of the Texas deserts.  Having also worked with Ford on A Single Man, composer Abel Korzeniowski has crafted another bold film score and editor Joan Sobel has laced the overlapping storylines together with precision.

Most of us would struggle to justify the high cost of a Tom Ford suit but when it comes to the ticket price of a Tom Ford movie, I can’t recommend the later more strongly enough.