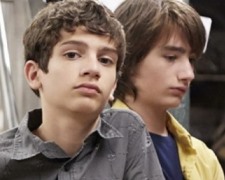 Released in 2004, House of Sand and Fog showed that life often throws up situations where there are no winners.  Jennifer Connolly played a struggling woman from San Francisco who had her house mistakenly repossessed by the government.  Ben Kingsley played an Iranian immigrant who subsequently bought it as a home for his family.  Neither side had done anything wrong but they found themselves in a tragic tug-of-war for the property when the government realised its mistake.  It was one of my favourite movies of that year.

That film and its messages sprang to mind when watching Little Men, the latest from American director Ira Sachs (Love is Strange).  Brian (Kinnear) and Kathy (Ehle) are a long-married couple who are battling to make ends meet.  He’s earning next-to-no income while pursuing an acting career and she’s just getting by as a physiotherapist.  They have a 13-year-old son, Jake (Taplitz) who shows a healthy interest in the arts but has trouble making friends at school.

Their economic situation improves considerably when Brian’s father passes away.  The will prescribes that title to his small Brooklyn apartment be split equally between Brian and his sister.  Brian and his family move into home in the short term to avoid having to pay rent back in Manhattan.  Jake is the most affected by the transition who now must adjust to a new school.

The apartment contains a downstairs tenancy that is occupied by Leonor (Garcia), a single mother with a 13-year-old son of her own, Tony (Barbieri).  She operates a small dress shop and makes a small profit only because of the peppercorn rent granted by Brian’s father.  Jake and Tony quickly become best friends and they spend an endless number of hours playing computer games and talking about girls.

Their friendship will be put to the test when a dispute develops between their parents.  Brian needs to sell the apartment so that he can split the proceeds with his sister (who also needs the money).  However, that involves terminating Leonor’s current tenancy and charging a “market rate” as to ensure the property retains its value.  This would immediately put her out of business and she protests strongly that it’s not what Brian’s late father would have wanted.

Shot on a budget of just $2 million, it is simple, moving stories like these which have struggled to find a place in Australian cinemas over the past few years.  Low budget independent films are now more likely to go straight to DVD/download because they don’t have the marketing budget (nor place in cinemas) to compete against the big blockbusters.  It’s nice to see Little Men bucking the trend and getting a release, albeit a small one.

It’s a well-told tale that comes together nicely in the last half-hour.  None of the performances are overplayed.  The adults are sympathetic towards others but realise that their own needs have to come before others.  The kids find themselves trapped in the middle where their mix of innocence and naivety serves as both a strength and a weakness.  The finale is a good fit for the material and the closing scene (set a little bit into the future) provides an important moment of reflection.