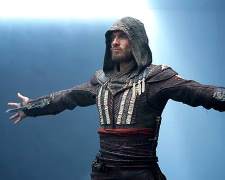 Assassin’s Creed is based on the video game series that was first released for the Xbox 360 and PlayStation 3 back in 2007.  As someone unfamiliar with the gaming world, I asked a teenage friend who said it was his favourite video game while growing up.  His direct quote – “It was fun when you ignore the storyline and go around bashing guards and seeing how long you could live before they all kill you.”  I can only assume this is faithful adaptation since that largely describes the movie too!

Most of the action takes place at a secretive research facility in Madrid run by Alan Rikkin (Irons) and his daughter, Sophia (Cotillard).  They are part of the Templar Order – a highly influential group that are looking to leave their mark on the world.  Up until now, the broader population has been controlled using religion, politics and consumerism.  Alan wants to go a step further and use science to rid the world of conflict and violence.

It may sound far-fetched but there’s an object known as the Apple of Eden which holds such power.  The problem is that it hasn’t been seen since the late 15th Century.  A flashback reveals that a brotherhood of assassins went to great lengths to keep the Apple from falling into evil hands.  They “worked in the dark to serve the light” and were prepared to sacrifice their lives to save mankind’s freedoms.

It’s at this point where the relevance of the film’s central figure becomes apparent.  Callum Lynch (Fassender) is a convicted murderer who has been kidnapped (well, kind of) and taken to the research facility.  He is the last surviving descendant of the assassins and so Alan intends to use a billion dollar machine, known as the Animus, to tap into his genetic memories and discover the Apple’s current hiding place.

You can probably see that there’s a worthwhile narrative here.  This is a movie that taps into the fine balance between individual freedom and government control.  This makes the finished film all the more disappointing.  The chaotic action sequences are over edited and the suspense levels are low.  It all feels so mindless and pointless.

Assassin’s Creed marks the second collaboration between Australian director Justin Kurzel (Snowtown) and stars Michael Fassbender (Shame) and Marion Cotillard (La Vie en Rose) in the space of two years.  Their previous outing was Macbeth – a film more positively received by critics.  They are all immensely talented individuals but for whatever reason, they haven’t breathed much life into this new franchise.  Weak box-office figures from the United States suggest that floated sequels may be put on the backburner.