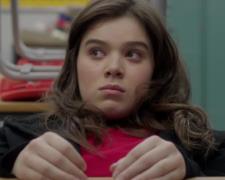 Several years ago, Kelly Fremon Craig wrote a script about a teenage girl who needs to take a good hard look at herself.  She sent it off to iconic producer James L. Brooks (Terms of Endearment, Broadcast News, Jerry Maguire) and hoped it get really, really lucky.  This finished product is proof that she did.

Brooks wasn’t so much drawn the screenplay but rather Craig’s passion and enthusiasm for the project.  He gave her a simple piece of advice – do more research.  Craig then spent 6 months interviewing teenagers at high schools and getting a feel for their world.  Her eyes were opened and the end result was a very different script.  Not a single piece of dialogue from the original draft remained.

Teen-orientated dramas are a staple of the American film industry.  Some are light like Juno and Easy A whereas others are heavier such as Thirteen and The Perks of Being a Wallflower.  The Edge of Seventeen fits somewhere near the middle of that spectrum.  There are a few laughs but there’s a much heavier undercurrent that is apparent from the very opening scene – 17-year-old Nadine (Steinfeld) storms into an empty classroom and tells the teacher (Harrelson) that she wants to kill herself.  From his sarcastic response, you get a sense it’s not the first time she’s done this.

Oscar nominee Hailee Steinfeld (True Grit), who has picked up a Golden Globe nomination for her performance, is wonderful in the leading role.  What’s most exciting about the character is that she is hard to like at times.  She talks too much and she pushes people away as part of a self-defence mechanism.  You’re likely to feel more sympathy for her friends and family.  The film is better for this.  You don’t often see it within the genre as things are traditionally more black and white.

The tipping point for Nadine is when she discovers her older brother, Darian (Jenner), and best friend, Krista (Richardson) are in love.  Darian is good looking, athletic and immensely popular.  She’s already hates living under his shadow but now he’s “stolen” the only good friend she’s ever had.  What follows is a period of rebellion where Nadine takes on a new, bolder persona and takes a few chances (some good, some bad) in the process.

I can’t pretend to relate to the troubles of a teenage girl in today’s society but The Edge of Seventeen comes across as realistic and authentic.  The battle to make friends and avoid the influence of peer pressure has been a hurdle for many.  That won’t be changing anytime soon.  The arrival of instant communication and social media over the past decade has added another layer of complication.

Craig’s film encapsulates all of this inside of its two hour running time.  With the focus on Nadine, these characters are put to the test and are thrown into awkward situation after awkward situation.  They make mistakes but that’s part of life – one of film’s strong messages that we often needed to be reminded of.