Review: Middle School: The Worst Years of My Life 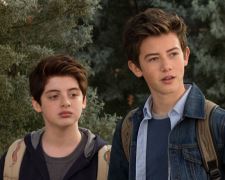 Middle School: The Worst Years of My Life is a chaotic family comedy that tries to win audiences over with its silliness but fails miserably.  It begins with the unfortunately named Rafe Khatchadorian (Gluck) starting at a new school in the middle of semester.  He’s been kicked out of two other schools in the past year (we’re not told why) and this is the only one willing to take him on (which doesn’t make sense given its top academic ranking).

You might think this is a complex drama about a troubled kid trying to make new friends (like last week’s The Edge of Seventeen) but instead, we see from the outset that it’s got a screwball Saved by the Bell kind of feel.  When Rafe meets the Principal Dwight (Daly) on the first day, he learns that the school is run like a prison.  Students walk up and down the corridors in single file and aren’t even allowed to talk to each other.  It’s one of more than 100 rules that form part of a strict “rule book” that all kids must learn and abide by.

The film comes with the standard sort of subplots you might expect.  Rafe sits in front of a bully in his homeroom who kicks his desk repeatedly and threatens to give him a terrible “wedgie”.  He falls in love with a smart, introverted girl who leads an AV Club (she’s the only member) and is running for Student President.  She has no chance because the other candidate is male with a rich dad and a “hot” mum – a fact which is bizarrely endorsed by the now sexist Principal Dwight (giving us another reason to hate him).

Rafe also has trouble at home.  His single mother (Graham) is dating an absolute big of a human.  Again, there’s no nuance to these characters – they’re either wonderfully good or wonderfully bad.  This guy hates the children so much that he’s concocted a plan to send Rafe to a military boarding school so that he can spend more time with himself and with his cars.

It sounds rather depressing but Rafe finds comfort in a new life as a vigilante.  After Principal Dwight burns his precious art notebook, he teams up with his new best friend (Barbusca) and orchestrates a number of Home Alone-like pranks to “take on the establishment” and embarrass Principal Dwight.  This includes putting coloured post-it notes throughout the school and spraying graffiti on the outside walls.

Most of the pranks are too far-fetched to take seriously.  The worst involves Rafe putting paint in the roof fire extinguishers and then setting off the alarm.  A mix of paint and water rains down upon the students who are now wearing coloured shirts (against the rules) and promptly break into an elaborate dance routine!

The film’s most puzzling element is the way in introduces a darker twist (you’ll know what it is when you see it).  This in itself could have let to something much more interesting but like so many of the storylines, it’s brushed aside in the space of a few minutes so that we can return to the zany comedy.  Perhaps I’m part of the wrong demographic but it’s certainly not what I wanted.