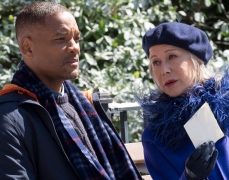 There was a time when Will Smith was the most “bankable” star in Hollywood.  Between 1996 and 2012, he starred in 13 films that grossed more than $100 million in the United States.  He could do action (Independence Day), comedy (Hitch), animation (Shark Tale) and heart-warming drama (The Pursuit of Happyness).

High hopes were held for his latest outing, Collateral Beauty, but they quickly dissipated when the film was released in the U.S. last week.  The box-office was poor and the reviews were even worse.  The blame was being passed around and it started an online debate about whether the “schoolyard assault” from nasty critics helped sink the film’s fate.

For the record, I don’t think critics have a major impact.  Will Smith’s last effort, Suicide Squad, has just a 26% approval on Rotten Tomatoes and a 6.4 out of 10 score on the Internet Movie Database (not good).  It didn’t stop the film from making close to $750 million internationally.  The biggest driver of a film’s financial success is marketing.  There’s been plenty of advertising for Collateral Beauty – perhaps audiences have been given a taste and simply aren’t interested?

I’d love to tell you this is a remarkable film that everyone must see.  I’m sorry, I can’t.  It’s a strange outing from director David Frankel (The Devil Wears Prada) that left a bad taste in my mouth.  Howard (Smith) is an owner and manager of a successful advertising company based in New York City.  Tragically, his whole world was upended when his 6-year-old daughter passed away.

Two years have passed since that date and he now walks around like a mindless zombie.  He won’t speak to any clients or any staff.  He shuts himself away in his office and builds pointless domino displays (the latest took 5 days).  He’s no different away from the office either.  He’s split from his wife, he lives alone, and he rides his bike into oncoming traffic like he has a death wish.

The co-owners of the business (Norton, Smith and Winslet) have reached a breaking point.  They’re about to lose another major client and it won’t be long before their hard work is lost and their shares will be worth nothing.  A competitor has made a generous cash offer to buy the company but Howard refuses to listen let alone negotiate.  Despite everyone else being keen on the sale, it cannot proceed without Howard’s approval given he is the majority shareholder.

So what would you do in this situation?  This is where the screenplay of Allan Loeb (Wall Street: Money Never Sleeps) derails.  The co-owners hire a private investigator (Dowd) to follow Howard and they learn he’s been writing therapeutic letters to Death, Time and Love.  They believe this demonstrates that Howard is not of sound mind and he should therefore not be allowed, under law, to stop the company sale.

It gets worse though.  They then employ three actors (Mirren, Latimore and Knightley) to play Death, Time and Love.  Each will approach Howard in the street and get him to think that he’s talking to some kind of apparition.  All of it will be filmed by the private detective on her iPhone and will be used as evidence should the case go before a judge.  With friends like these, who needs enemies, right?

This is a contrived storyline that comes across as mean-spirited.  The idea of using paid actors as “therapy ghosts” is intriguing the motivations of the co-owners are incredibly misguided.  The film then has the audacity to suggest they’re doing the right thing!  There are several subplots designed to make us feel empathy for the co-owners that are unrealistic and manipulative.

The only parts of the film that comes across as sincere are handful of scenes where Howard slowly opens up to the leader (Harris) of a self-help group who is trying to help him through the grieving process.  That said, she lost me when explaining the concept of “collateral beauty”.  It epitomised so much of the movie in that I couldn’t buy what it was trying to sell.