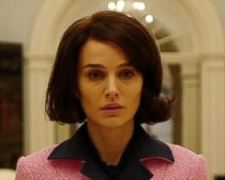 The wife of the U.S. President, commonly referred to as the First Lady, has been depicted on screen numerous times.  Joan Allen earned an Oscar nomination for playing Pat Nixon (Nixon, 1995) and Sally Field received the same recognition for her portrayal of Mary Todd Lincoln (Lincoln, 2012).  Laura Linney took home an Emmy Award for her performance of Abigail Adams in the HBO mini-series John Adams (released in 2008).

The catch with all of those films is that the President was the focus and the First Lady was merely a supporting character, albeit an important one.  Screenwriter Noah Oppenheim (The Maze Runner) bucks that trend with Jackie.  This is a film devotedly solely to Jacqueline Kennedy, the wife of John F. Kennedy, and there are only a handful of scenes where she doesn’t appear.

For those interested in modern history and the U.S. Presidency, the film offers insight into what went on behind the scenes in the days following Kennedy’s assassination.  Jackie found herself planning a funeral and selecting a burial site for her husband.  It was made even more difficult by the close scrutiny of the hungry media, fellow politicians and advisors, and a curious public.

On top of all of that, Jackie had to prepare to vacate the White House.  President Lyndon Johnson (played by John Carroll Lynch) was sworn in two hours after Kennedy’s death and Jackie quickly learns that “a First Lady must always be ready to pack her suitcases”.  You wouldn’t describe her as “homeless” but didn’t have a lot of options when moving out on short notice.

There’s a deeper layer to Jackie that explores the concept of “legacy”.  What is important – what you do or how you are remembered?  Many people live rich, intricate lives but how they are forever known can come down to a single act.  Abraham Lincoln is regarded as one of the greatest Presidents in U.S. history for helping guide America through the Civil War in the 1860s.  If asking people on the street about Lincoln’s other achievements, you will undoubtedly get a few blank looks.

Jackie saw herself as the custodian of her husband’s legacy after his death and wanted him regarded as one of the great Presidents.  Speaking to a journalist for Time Magazine (Crudup), Jackie firmly notes that the not-so-nice things she says about her husband are “off the record” and not to be published.  You also sense her disappointment that as incoming President, Lyndon Johnson would now receive credit for many initiatives spearheaded by her husband.

Directed by Chilean Pablo Larraín (No), most of the film takes place in November 1963 but there are flashbacks to provide perspective.  The most significant is a sequence, included at Larraín’s suggestion, where Jackie provides the first ever televised tour of the White House.  It allows us to see two sides to Jackie.  In front of the camera, she’s poised and prepared.  Off camera, she’s a little nervous and self-aware.

Natalie Portman (Black Swan) delivers a beautiful performance and it’s easy to see why she’s one of this year’s Oscar frontrunners in the best actress category.  Portman skilfully mimics Jackie’s mannerisms but more importantly, you understand her character’s complexities.  The soft film score and lack of dialogue give parts of the film a hypnotic feel.

So how much of what we see on a screen is accurate?  Larraín and Oppenheim researched the subject thoroughly but given it offers such a deep, personal insight into Jackie (she’s alone in many scenes), there is always going to be an element of subjectivity.  I love the irony of this.  Jackie was controlling and had a particular “image” she wished to portray.  Now that she’s gone and many decades have passed, a new generation can look back and form their own view.  Films like this will help shape them.