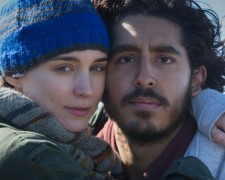 At last year’s Academy Awards, Mad Max: Fury Road broke a 14 year drought and became the first Australian film to be nominated for best picture since Moulin Rouge!  Perhaps the floodgates have opened.  There’s been strong hype for Lion since it took runner-up honours (behind La La Land) at the Toronto Film Festival in September.  It has since picked up 4 Golden Globe nominations and appeared on numerous “best of the year” lists.

This is a true story and it’s also a very emotional story.  When we first meet Saroo (Pawar), the year is 1986 and he’s a 5-year-old boy living with his mother (Bose) and older brother in a Khandwa, India.  Like so many around them, they’re a poor family struggling to make ends meet.  This is best illustrated by a scene where Saroo steals coal from a nearby construction site which he then trades in the marketplace for a small bottle of milk (a luxury item to him).

Saroo’s life is forever changed when he falls asleep on an empty train parked at the local station.  He was there waiting for his brother to return from a short trip.  On waking up, Saroo finds the train is locked, empty and moving at high speed.  He screams for help but the driver can’t hear him over the sounds of the rattling carriages.  Two days pass before the train finally comes to a halt in Calcutta, close to 1,500km away, and he is able to escape.

It’s a pretty bleak scenario for Saroo.  He’s a 5-year-old with no sense of geography who doesn’t know the name of his town and doesn’t know how to find a way home.  He is preyed upon by people smugglers and the police offer next-to-no assistance.  He ultimately ends up in an orphanage from which he is sent to a couple in Hobart, Australia (played by David Wenham and Nicole Kidman) who are looking to adopt a child.

This is a film of two distinct parts.  The first half chronicles Saroo’s early life in India and his upbringing in Australia.  The second half follows the older, twenty-something-year-old Saroo (now played by Dev Patel) as he reflects upon his past and his identity.  While he’s had a great, loving upbringing in Australia, he yearns to track down his biological family.  What seemed impossible two decades ago may now be distinctly possible with websites like Google Earth acting as a guide.

It’s hard not to feel a tingle down your spine as the film’s reaches its climax.  My eyes were moist and I wasn’t the only one in the audience with that same reaction.  It’s an impressive debut feature from Australian director Garth Davis who has made a career up until this point specialising in television commercials. I strongly suspect those days are behind him as Lion proves that he can take a great story and translate it into a great movie.  Also deserving praise is writer Luke Davies (Candy, Life) who adapted Saroo Brierley’s autobiographical novel in creating the screenplay.

8-year-old Sunny Pawar will melt hearts with his performance as the young Saroo.  A small team scoured schools across India and auditioned roughly 2,000 children.  It’s easy to see why Pawar got the nod given he’s so natural on screen.  Dev Patel (Slumdog Millionaire) is also superb as the older Saroo.  He character internalises his problems but Patel still lets us see through into his tortured soul.

A few elements are slightly undone such as Saroo’s troubled relationship with his adopted brother (which could be a whole other film).  Still, this is a powerful true story about one man’s never ending search for answers.

You can read my interview with director Garth Davis by clicking here.