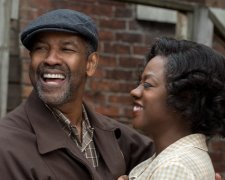 When Viola Davis won the Screen Actors Guild Award last week for best supporting actress, she made a passionate speech about playwright August Wilson and this film’s narrative.  To use her words – “What August did so beautifully is he honoured the average man… who happened to be a man of colour. Sometimes we don’t have to shake the world and move the world and create anything that is going to be in the history book.”

Those two sentences are an apt description for Fences.  It is based on the iconic play that was first performed on Broadway in 1987 with James Earl Jones and Mary Alice in the leading roles.  That same year, it won the Tony Award for Best Play and the Pulitzer Prize for Drama.  It was revived on Broadway in 2010 with stars Denzel Washington and Viola Davis.  Once again, it was very warmly received.  It was around that time when Washington starting giving serious consideration to directing a film adaptation.

Fences is set in the late 1950s and is centred on a family living in Pittsburgh.  Aside from a handful of short scenes, the entire film is set in and around an old brick house.  Troy Maxson (Washington) is a 50-something-year-old living with his wife, Rose (Davis), and youngest son, Cory (Adepo).  He was a talented baseball player in his youth but his dreams of becoming a professional athlete amounted to nothing.  He now works as a garbage man for the local government – a job he’s held for more than a decade.

A curious element to the film is that it’s heavy on conversation and light on visual stimulus.  There’s an early moment where Troy protests that it’s only white men who get the easy task of driving the garbage trucks.  He points out this difference to his employer and put his career in jeopardy by seeing a promotion.  Instead of seeing this all unfold, the camera cuts away.  We learn about the outcome later when Troy talks to his wife at home.

This is a terrific drama that highlights what has changed over the past 60 years and what has remained the same.  All of these characters are put to the test as tensions develop.  Those adding to the complexity include Gabriel (Williamson), Troy’s brother who suffered a head injury during World War II and may need to be institutionalised, and Lyons (Hornsby), Troy’s middled aged son who is in need of money until his sagging music career takes off.

The performances are exceptional with Denzel Washington at his very best.  He plays a dominating patriarch who must always have the upper hand.  When Lyons tries to return the $10 he borrowed the previous week, Troy refuses and spins the actions into something negative.  Viola Davis is also wonderful as a woman who has stood steadfast by her husband but in the process, has given up her own dreams for a better life.  Audiences will have different opinions of each character depending on their own experiences.

They say “dead men tell no tales” but that phrase doesn’t apply in this case.  August Wilson just received his first Academy Award nomination for the best adapted screenplay.  The twist is that Wilson has been dead for more than 11 years.  He wrote the film script prior to his passing in 2005 and it had been waiting for a man of Denzel’s sensitivity and expertise to come along and direct it.

Nominated for 4 Oscars including best picture, is a heartfelt tale about an “average man”.