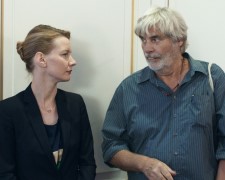 Ines Conradi (Hüller) is a German business consultant who has spent the last year working on a major project in Romania.  She’s good at what she does but you sense that life is made more difficult because she’s a woman.  Ines has to go that extra mile to convince her colleagues and customers that her advice is accurate and well-informed.

Out of the blue, Ines is visited by her father, Winfried (Simonischek).  He makes a bizarre entrance by turning up at her work wearing a wig and fake teeth.  He announces that he’s taken a month off work and wants to spend more time with daughter.  They don’t see each other very often and Winfried jokes that he’s hired a substitute daughter to fill the hole left by his daughter’s absence.

Ines isn’t exactly welcoming her dad with open arms.  She’s extremely busy at work and is trying to land a major new contract with the CEO of a German oil company.  She doesn’t have time to “play tourist” and spend it with her joke-loving father.  Given her tight schedule, she takes a chance and invites her father along to a business function (to kill two birds with one stone).  It’s at this point where the hilarity begins.

Over the next few weeks, Winfried injects himself into Ines’s life in an assortment of bizarre ways.  There’s a scene where he pretends to be the German ambassador at business function.  There’s another where he turns up at her workplace, dressed in a suit and tie, proclaiming to be a “life coach” by the name of Toni Erdmann.  His most bizarre appearance comes late in the film at a birthday party hosted by Ines at home.  It’s hard to keep a straight face.

It’s not often you’ll see a comedy span 162 minutes but Toni Erdmann is outlandishly good.  It’s the German equivalent of a Coen Brothers movie – you have no idea what’s around the corner.  Sandra Hüller is wonderful in the lead role and you see her slowly soften as she gives in to her father’s silliness.  It’s one of the most original father-daughter tales that cinema has delivered.  The film’s exploration of her romantic side is also unusual and entertaining (a scene with a cupcake springs to mind).

I’m struggling to think of a more warped, out-of-the-box comedy from the past year.  I caught the film two months ago at the Brisbane Asia Pacific Film Festival and it’s stuck with me ever since.  The fact it’s the frontrunner to win the best foreign language film Oscar has helped secure this wider release across Australia.  I can’t wait to see how audiences react.