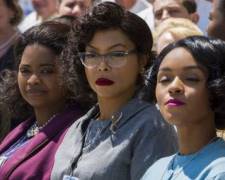 If you pick up an aerospace history book, you can read about John Glenn becoming the first American astronaut to orbit the Earth in 1962.  What you’re unlikely to see are the names of the hundreds, if not thousands, of people who contributed to that milestone with their work behind the scenes.

Hidden Figures focuses on three individuals in particular.  They were all African American and they were all pioneers who overcame huge barriers at NASA because of their sex and race.  Katherine Johnson (Henson) was a mathematician who could perform calculations as fast as anyone.  Mary Jackson (Monáe) was a budding engineer who helped design the space capsule.  Dorothy Vaughan (Spencer) was a supervisor who learned to master one of the first IBM electronic computers.

Based on the non-fiction book by Margot Lee Shetterly, the screenwriting team have given it a light touch.  Don’t get me wrong – the discrimination these women endured was outrageous.  I’d like to hope that you couldn’t get away with it today.  Rather than make this too depressing, the screenwriting team have crafted a film that highlights and celebrates their achievements.  There are lots of laughs and these characters offer lots of personality.

The villains in this tale are the work colleagues who refused to acknowledge the efforts of Katherine, Mary and Dorothy in the workplace.  Jim Parsons plays the lead engineer who goes to great lengths to make simple tasks all the more difficult for them.  Kirsten Dunst is an administration supervisor who plays down their efforts and squashes their hopes at promotions and pay rises.  Kevin Costner fits somewhere in the middle – the director of the Space Task Group who realises there’s a problem but is too busy to act on it.

Given increasing number of sequels, reboots, remakes and spin-offs released in cinemas each year, I often worry that we’ve run out of good stories to tell.  This film refutes that concern.  Writer-director Theodore Melfi (St. Vincent) was in serious contention to direct the new Spider-Man reboot but when he read the draft script for Hidden Figures, he withdrew his name from consideration and took this on instead.  He, like so many others, realised this was a great yarn worth telling.

Audiences and critics have agreed.  The film has been nominated for 3 Academy Awards including best picture and recently won the lucrative Screen Actors Guild Award for the best ensemble.  It has pulled in $125 million at the box-office in the United States (a figure higher than any of the other best picture nominees) and spent its first three weeks in the #1 position.  Given the $25 million budget, it’s one of this year’s big success stories.

The film isn’t perfect.  It’s a simplistic, cheesy and repetitive in places.  There’s not much depth to the supporting players.  You can put most of those criticisms aside because it’s the wonderful lead performances that will win you over.  Taraji P. Henson, Octavia Spencer and Janelle Monáe are very, very hard to dislike.  They’ve created three distinctive personas for their respective characters and they serve as a fun, beautiful tribute for the real life counterparts.

If Hollywood can keep producing more films like this, I’ll be a happy individual.